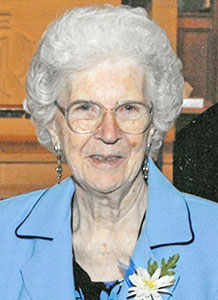 Izzy was born on November 3, 1926, in Lanesboro, Minn., to Selmer and Mary (Gullilckson) Topness. She was raised on the Topness family farm in the Highland area. On November 23, 1946, she was united in marriage with Conrad Johnson at Highland Prairie Lutheran Church in rural Peterson, Minn. Izzy and Conrad farmed in the Highland and Oak Ridge areas for many years until they retired in Money Creek, Minn., in 1971.

Isabel was a very sweet lady who loved animals.

Izzy was preceded in death by her husband; one son, Gale; brothers: Leonard, Clarence and Sidney Topness; and by a sister, Minerva Thompson.