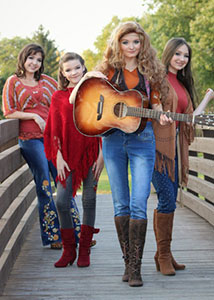 The Area Council of Churches for the Mabel area is excited to invite everyone to join them for the ecumenical church service at 9:30 a.m. on Sunday, September 12 on the Steam Engine Grounds in Mabel.  This year’s featured musical guests is a team of sisters from Spring Valley called “Sister Luv.”

Sister Luv is comprised of four sisters — Xena (22), JLee (18), Elsie (15) and Shelly (13) — who sing, put on shows, and share a love for music and for each other. For as young as they are, they’ve been doing this awhile. Shelly was just four when they first performed as part of a homeschool group. Singing in their church was another early venue. But it was a special family “sing-a-long” in 2018 that brought it all together. That’s where the gift, wish and promise came in.

The girls’ beloved grandfather, Mike Watson, their “Papa Bear,” was in the last stages of brain cancer. In his room at a local care center, the girls visited and did what always seemed to come natural for them — sing together. The gift of their music had always touched Mike, obviously, but in those moments it also impressed the nurses and staff. Mike expressed a wish. He wanted the girls to promise him they’d keep at it and would continue doing their music together. They made that promise and they’ve kept it. After Papa Bear’s passing, it was no longer just his four granddaughters singing together. They became Sister Luv.

“The girls have always loved music and singing around the house,” says Linda Watson, Mike’s wife and the girls’ grandmother. “But after Mike shared his wish, it was like they had a new determination to do this seriously, to commit it to the Lord and see where He might lead us.”

Come and hear the girls as they share their love of music and the Lord throughout the ecumenical service. Area pastors will add to the service with scripture and devotion.  The offering that will be taken at the service will be divided between area hospice organizations that serve the Mabel area.