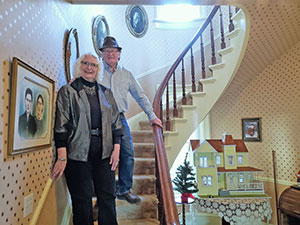 “It’s a love story with a little bit of demonic possession thrown in for good measure,” explains Todd Johnson, COO of Stone Fox, LLC.  Johnson is also line producer and one of the executive producers of the film Voice of Shadows.  The majority of the film took place at the James A. Thompson House, in Lanesboro, September 13-24, 2021.

“Voice of Shadows is a story about cults, faith and trying to get ahead from a working class position. It’s technically a horror film, but more of a psychological thriller with some scares,” is how the writer and director, Nick Bain, COO of Ark Entertainment, describes the film.

“Voice of Shadows is about a young working class couple, Gabriel and Emma,  who stand to inherit an estate from an eccentric great aunt, Milda, if they abide by a set of rules. Emma, Gabriel and Celeste, (Gabriel’s little sister), soon move into the house where it’s made clear that Gabriel isn’t a welcome presence. Soon, anomalous things begin to happen in the house and creepy beings keep calling an old rotary phone,” states Bain.

“Originally we were going to shoot in Columbia, then we decided to shoot in Minnesota,” says Bain. “Last summer, we were considering different houses and bed and breakfasts to shoot in and we had reached out to the James A. Thompson house. I was struck by how epic and Victorian it was and it was exactly what we were looking for. I reached out to Marti and David Gray and they were enthusiastic about the possibility of having a movie shot there,” comments Bain.  “I went out there and stayed the night and took a look around. They proved to be really wonderful people and open to the challenge. They are really exceptional individuals,” he adds.

When asked why the homeowners were interested in having a movie filmed in their house Marti replied, “Just for the experience, because I wanted to know.  I love to learn and it’s my nature,” she said, and this opportunity fit her personality to a tee.

“If it is successful and they decide to have a sequel, I would consider them coming back into my home, but only for Nick.  If any other movie company contacted me I would be a solid, firm no, but I would do that for Nick to continue to legacy of it,” notes Marti.

“We had a lot of good talent in the movie like Bee Vang, who is the kid from Gran Torino, he has a big part in it, and my friend Martin who is in a lot of big movies, he plays a big part in it.  And then we had a couple local actors, Michael Paul Levin, Jane Hammil and Kevin Lokey as well as Bee Vang, are all Minnesota actors,” explains Bain.

Although the movie is not set in Lanesboro, local residents will recognize more than just the James A. Thompson house.  “The movie is set in a nondescript part of the Midwest. However, there are some driving shots of the couple approaching the town and Lanesboro is such a unique landscape that a keen eye will pick up on the location right away,” states Bain. “There’s also a lot of clues where the movie does take place but it’s never specifically articulated,” he adds.

The City of Lanesboro and the entire area have placed several more people under its spell since filming took place there.  “Honestly, I had never visited Lanesboro before last summer,” states Bain, who is originally from St Paul. “I had no idea how gorgeous the Lanesboro area was! It felt like I had discovered a secret treasure.”  Bain, who now lives in Los Angeles on Hollywood Blvd., explains how different life is in Lanesboro.

“There’s a lot of really interesting folks that I met there. Very eclectic. Definitely not like a standard small town community – it seemed like you guys have a really good burgeoning theatre group and really good restaurants,” he adds. “I can’t wait to go there with my boyfriend and spend a weekend there. I am going to come back for sure,” says Bain.

The crew and talent frequented the local restaurants, and spent a lot of time at High Court Pub and the Root River Saloon. “A special shout out to the Root River Inn and Pedal Pushers – they kind of saved us,” says Johnson. “One of the bartenders at the High Court Pub, Lisa Pahl, did the majority of the meals and was really just a great person,” he adds. The group also appreciated the coffee provided by Parkway Market.

“I’m very happy to have been in Lanesboro.  That was a great experience for me personally, and for quite a lot of the crew –we had a great time there. I love the town, I’m hoping to take my wife there, just to spend some time at the house itself; we have been invited to come and stay,” says Johnson.

“The amount of outreach and help from the Chamber of Commerce, everybody there, it’s super important, but more than anything we are very grateful for everything that happened,” notes Johnson.

All that is left now is for the Grays, the residents of Lanesboro and the entire area to anticipate the release of Voice of Shadows.  “I’m excited for it to come out,” comments Marti.

“We have shot about 85% of the movie and have some pick-ups to do in the spring. We are already in post production with what we have and it looks great. We’re excited to share the movie with everyone and expect post production to be finished by the fall of 2022,” states Bain.

The City of Lanesboro, which is already well known, may just become famous!