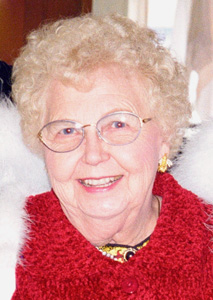 Ida Mae Zeller, age 95, died in her home at Calista Court in Winona, Minn., on October 2, 2019. Ida Mae was born to Carl and Hilda Struxness in Westby, Wis.  She lived most of her life in Whalan, Minn., where she moved when she was 10 years old. She married George Floyd Zeller on March 5, 1943, during his first furlough from the U.S. Army. While he served in World War II, she worked in Minneapolis. After the war, George and Ida Mae returned to Whalan and built their life together. They opened George’s, the local gathering place for decades, and raised their three children there. They formed lifelong friendships and were a vital part of the community.

She will be missed by her children Sherryl (Jon) Creede and Nick (Yonok) Zeller, grandchildren Alex Graf, Tatiana Graf, Lucretia Keeler, Marisa Zeller, Han Zeller, Stephanie Miller, and Chae Zeller; and great-grandchildren Felix, Lenny, Greta, Easton, Auden, Arlo, Alexia, and Lenore. She will also be missed by her sister Rhonda Pohn, her nieces and nephews, and many extended family and friends.

Ida Mae was a lifelong learner who wrote poetry and short stories throughout her life. She wrote a memoir for her grandchildren when she was in her 70s. Ida Mae was funny, the family historian and story keeper, and a chocoholic. She loved music and knew quite the assortment of bawdy wartime songs. She hated when people called her Ida, rather than Ida Mae. She was strong and outspoken, but also kind and warmhearted.

In lieu of flowers, memorials may be directed to Whalan Lutheran Church.

Services entrusted to Fawcett Junker Funeral Home, Winona, Minn., and Fountain City, Wis. Words of sympathy or remembrance may be left at fawcett-junkerfuneralhome.com.