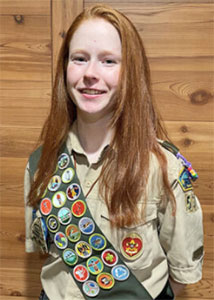 Hailey Alfson of Houston not only hopes to be an inspiration for other young girls, but has committed to being a mentor to help them achieve their goals.

As one of America’s first female Eagle Scouts, Alfson sees the importance of being a leader and paying it forward.

At 17, she is a junior at Houston High School, where she is involved in basketball and soccer. While in the past she has run track, this year she is planning to play softball and join the trapshooting team. Alfson especially enjoys outdoor activities like hunting, fishing, camping, hiking and kayaking, to name a few.

Alfson grew up in a family that was actively involved in the Boy Scout organization. Sharing her love of nature and being in the out of doors, her parents, Audrey and Tracy, served as troop leaders and her brother, Alex, was a member, earning his own Eagle Scout rank in 2015.

“I was always right there doing stuff with the troop and being involved,” she added.

In May of 2018, Boy Scouts of America announced it would change the program’s name to Scouts BSA and would allow girls to officially join the organization. Membership for girls, age 7-10, was allowed into Cub Scouts that first year and older girls, 11-17, were allowed to join beginning February 1, 2019.

Since those changes were made, Alfson was one of over 140,000 girls who have joined nationwide.

With her participation in the local troop now official, Alfson set a goal to become an Eagle Scout. Wanting to be part of the inaugural class of females, she and her leaders outlined a course of action, with deadlines, for her to achieve her goals.

Becoming an Eagle Scout takes dedication, focus and a lot of hard work. Only about 6% of scouts achieve this rank. With that knowledge, Alfson knew she would have to remain focused and dedicated to her objectives.

Since becoming an official member of Scouts BSA, Alfson was able to attend National Youth Leadership Training, attend summer camp in Wisconsin and visit the Philmont Scout Ranch in July of 2019. “We were able to go hiking in the Rocky Mountains, carrying everything on our backs. We’d hike 6 to 12 miles a day,” she recalled.

Like most scouting activities she had been involved with over the years, Alfson described it as a great experience.

As part of her plan to achieve the Eagle Scout rank, Alfson said she needed to earn 21 merit badges that focus on life skills such as camping, cooking, first aid, navigating, citizenship and the environment. “All the merit badges pertain to life and make you a better human being overall,” she said.

Also, to achieve Eagle Scout, one must have held two positions of leadership, which Alfson said fit right into what she had wanted to do with the local troop.

She explained, “Everything we do in scouting is about being a good leader and a good follower.” Alfson added there are times when great lessons can be learned in both roles.

Once a scout meets the merit badge requirement, they must complete a community service project for a non-profit organization. Alfson said the projects can range from a single-day outing to building park benches or fixing something. “It’s about bringing all your skills together as one, to make the community better,” she said.

When choosing her own community service project, Alfson called upon her own experiences with the local snowmobile club and the trails it maintains each winter.

In one area, a 100-year-old railroad bridge was in poor condition, but if it could be fixed, the trail could be rerouted away from a highway and over the bridge to make the trail safer for riders.

“After riding that trail myself, it was my least favorite section because the trail brought us onto the highway,” she explained. “I was at a snowmobile meeting and they were talking about it. I needed a project, so I got it done.”

Alfson said she spent a lot of time figuring out the small details and solving problems that came up during the project. Because the bridge needed new planks attached to its iron support beams, she needed to determine how much lumber would be needed. Once that was figured out, she had to deal with a lumber shortage created by the pandemic.

In mid-July, she and members of her scout troop and the snowmobile club were able to find lumber and they were able to get started.

Then, she discovered attaching wood to iron required special screws, which she had to special order from Fastenal. Even then, power tools were needed to screw them in, so generators were transported to the site to provide electricity.

The actual re-planking of the bridge took under a day to complete, Alfson said. “We had a lot of help from the club itself and a few scout volunteers to transport the boards to the bridge.”

Completing the physical project was the easiest part, she said, as she soon discovered the not-so-pleasant task of 30 pages of “paperwork” she needed to complete for her final report.

She was then interviewed and completed her board of review before officially earning her Eagle Scout rank.

When asked what she felt upon reaching her goals, Alfson said. “It was happiness. I was happy to be done in many ways. I felt an overwhelming sense of pride. I had seen it done so many times and, now, I had been able to achieve it myself.”

At the end of February of this year, about 1,000 girls became Eagle Scouts and Alfson was the only one in the Gateway Area Council to do so.

While she was also the only one in her local troop to become an Eagle Scout this year, she noted she would not likely be the last.

“I would guess four other girls in our Troop 531, in Houston, will Eagle in the next year or so,” she added.

“I couldn’t have done it without my troop leaders and my fellow scouts,” Alfson continued. “It was a group effort.”

She specifically thanked her mother, Audrey, who was the scoutmaster of her troop and Dan Borgwardt, leader of Troop 53, the boys’ troop in Houston.

“It was nice to have the scout leaders there,” Alfson said. “They helped me build leadership skills and showed me how to help the troop as a whole.”

She also appreciated the fact that her leaders weren’t always there to solve her problems. They let her work through them and find the solutions on her own by providing guidance and support, but not fixing things for her.

That is a role she hopes she can fill in her local troop in the coming year for her fellow scouts. “I want to be there to guide them, but I’m not going to leave the training wheels on,” she said. “I’m going to let them fall and learn their own problem solving skills. I plan to stay active in the troop, bringing up the younger kids and teaching the next generation. It’s my turn to step up.”

Alfson knows her experiences with the scouts and her journey to Eagle Scout will help her immensely in the future. “It helps you work with your hands and to be prepared for any situation,” she said. “You know you need to be prepared for a rainy day or for the sun. It has made me a better person, a better leader.”