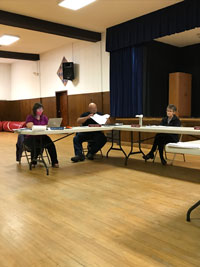 The Houston City Council focused on the financing of the community center renovations at their October 13 meeting. Mike Bubany of David Drown Associates, Inc. walked the council through the process. After a public hearing on the bonding at which no one spoke or asked any questions, Bubany explained that the city needed to identify enough parcels that the argument cold be made that they will benefit from the project at least as much as the cost of the project.

Bubany acknowledged that this was a “bogus legal thing” with the purpose of simply showing that the city had the authority to borrow. He assured the city that the county would be spreading the expense across the whole city and not concentrate the assessment on the identified parcels. Funding for the city hall portion of the renovations will not come from this bonding. Only the community center is eligible for the bond.

The bond will amount to a 3% bump in city taxes. This increase, however, has already been taken into account in the calculations for the preliminary tax levy. The levy had allotted for a 5% increase in taxes. 3% will go to the bond and 2% is for expected inflation. The council approved the resolution to authorize the issuance, sale and delivery of the $161,000 general obligation tax abatement note.

City Administrator Michelle Quinn informed the council that interior office doors would need to be purchased. The old front door proved to have damage to its frame and hinges. The current Cedar Street walk-through door approach fails to meet ADA slope compliance; a section of concrete will need to be torn out and replaced. There are three areas where there are existing roof vents on the roof. Since they have caused leaks in the past, replacing them now would ensure roof integrity and prevent future leaks. The cost of these needed improvements will be an additional $3,500 to $3,600.

The air conditioning units will need to be placed on the ground on the west side of the building. An  easement will need to be drawn up with the Chamber of Commerce to allow for this.

Matt Mohs returned to the council meeting to report on the Lincoln Street Tree Plan. As he had promised, Mohs had sent a letter to residents in the area sharing the proposed plan for replacing the trees. As residents responded, Mohs had met with them to discuss their wishes. Mohs assured the council that all residents’ concerns had been taken care of with some changes of tree selections and placements. Trees to be used include swamp white oak, hackberry, honey locust, and linden. These varieties were selected based on suitability for city street conditions. The council intends to wait until spring to have the trees purchased and planted. 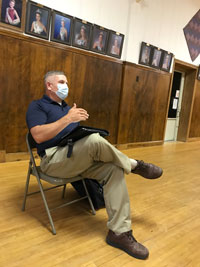 CEDA (Community and Economic Development Assoicates) shared in a letter that five more businesses had applied for the $1,000 CARES grants. They recommended the approval of four of the applications, noting that one of the businesses was an ineligible business type. With only $200 left after accepting the first three applications, the CARES funding would not totally cover all four applications,  The council decided to cover an additional $800 so all four businesses — Erin Highum & Margaret Knutson Daycare, JT’s Corner Bar and Grill LLC, Cox Hardware LLC, and Stintson’s Country Style Meats LLC — will receive the full  $1,000 grants.

Quinn presented the current plan for the CARES Act Funding Expenses. There were no changes in the plan.

Mayor Dave Olson declared, “I’ve had it with that mower!” With high maintenance expenses quoted from SEMA, Olson suggested that the council “park it up against the wall and decide in the spring what to do with it. I object to fixing that John Deere right now!”

Olson asked for the council’s permission to keep investigating and looking for something more economical. He was given a maximum of $2,500 to spend on the situation.

scheduled the canvassing board for city elections as part of the regularly scheduled council on November 9; scheduled a Truth in Taxation Meeting for December 14 at 6 p.m.; decided to discontinue the direct pay enroll discount for city billing; currently there is a $2.00 per month discount for enrolled citizens; these citizens will continue to receive the discount, but new customers will not be offered the discount; moved City Administrator Quinn’s status from probationary to permanent and approved her the accompanying salary increase; received information asking the council’s plan for the Maple Street Community Building as well as the International Owl Center property and agreements­ — both will be discussed at a future meeting.

The next meeting of the Houston City Council will be held November 9. The public is welcome to attend.