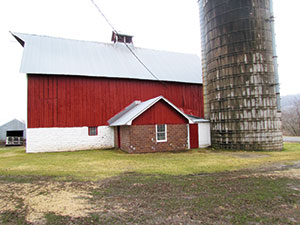 The Bernard Eden family farm is the only farm in Houston County to be recognized as a Century Farm in 2022. The family’s homestead is located across the road from the first tee at the La Crescent Pine Creek Golf Course in scenic Pine Creek valley.

The farm was purchased from Anna E. Schlabach in 1920 by Herman Eden and Theodore Eden II. The brothers owned the farm for five years.

The current owner, Bernie has owned the property for 12 years. Bernie was born on August 6, 1934, on the family farm. He has lived on the farm his entire life except when he served in the Army. Bernie served in Germany during his time in the service.

The farm was originally 240 acres. It is now 239 acres. On the Century Farm application, Gregory Wegner, Bernie’s nephew, explained, “According to the property abstract, Theodore II deeded one acre of land near the southeast corner in 1928 for the construction of the Toledo grade school after the previous school, located nearby, burned to the ground.”

The original barn is standing. The stone for the barn’s original foundation of the barn was cut from a quarry located near the northeast corner of the property in 1920. The barn still stands on this foundation. About 10 years ago, Amish craftsmen replaced the foundational timbers to maintain the structural integrity of the barn. Wegner adds, “Bernie’s uncle and father mined the rock to build the foundation for the barn, which is still pretty solid to this day.”

The present home was built in 1979. With the assistance of his nephew and his nephew’s wife Paula, Bernie plans to live on the homestead until he takes his last breath. Wegner mentioned that it is payback time. “I spent a lot of time here when I was a little kid; he saved my life. When I was eight years old, Grandma, Bernie’s mother, Sophie Kramer, warned me not to climb any of the haystacks. I was in third grade, and I did. I disobeyed my grandma! I climbed that haystack as I was curious about it. I went down, from the top down, and fell in. I started to lose my breath and hollered out. Sure enough, Bernie was coming out of the barn and heard me. He ran over there. Bernie is a big, tall guy and reached down and pulled me up by the scruff of my neck.”

Wegner laid out a map of the property on the kitchen table while mentioning that a full survey was just recently completed. “It was the first full survey of the property since 1854.” Wegner pointed out the boundary, the cropland, the buildings, the wooded hill behind the house, and the stream that runs through the property.

Wegner explained, “There is a huge cornfield. It will probably be planted by the end of this month. Last year it was planted on April 22, a day before a big snowstorm, which is perfect when you plant corn. It was a bumper crop this past fall, too. Plus, five cuts of hay in one season. Bernie said it is the biggest cut since 1960.”

Corn, alfalfa, and dairy were the farm’s major crops. The property has 61 tillable acres, rented out to three local families – Duwayne Johnson and son Robert, Eugene Bauer and son Jon, and Erik Abnet. “These guys are good stewards of the land. They are one of the reasons why there was a record five cuts of hay,” said Wegner. “By the end of the month the Johnson family will be plowing. They will plant the corn. They always plant the day before a rainstorm so the field can really soak up the rain. These farmers have got to know the weather like the back of their hand. This guy [Bernie] knows a lot.”

When asked how farmers learn about the weather, growing crops, and raising animals, Bernie quietly answered, “We just did it.”

A one-of-a-kind farm product that one will not find on other farms but is abundant on the Eden farm is golf balls. The first fairway runs parallel to the cornfield. Wegner explained, “Golfers have been chipping thousands of golf balls throughout history from 1953 to the present.” He has already given 1,500 cleaned golf balls to two high schools.

The deer and black turkeys that live in the wooded area behind the home are plentiful. They enjoy the leftover corn each fall after harvest. Eagles can be seen flying overhead.

“The late farmer, Frank Lindeman, on Burns Valley Road, brought me a stone ax head that he uncovered during spring planting and asked me to take it to the Mississippi Valley Archaeology Center to get tested. He wanted to find out how old it was.” Wegner, a retired history professor, paused, “Twelve thousand years old. This valley is ancient. It is older than the pyramids.”