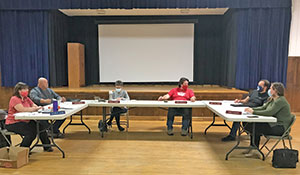 Marlene Schultz appeared before the Houston City Council meeting November 9, 2020, to share the details of the annual Christmas celebration planned for Houston. The parade is scheduled for 6:30 p.m. with lights in the park going on at the same time so people can go through the park immediately after the parade. There will be no afterglow and no activities at the school. If Santa makes a visit for the parade, he will remain on his float. KQ98 will still be providing candy for the kids. The candy will be on the edges of Santa’s float so kids can get it during the parade as the float passes. Schultz assured the council that the Christmas trees at the park will be distanced for viewing safely. City Public Works Superintendent Randy Thesing added that the city wreathes will be hung November 19.

Matt Mohs also addressed the council and updated them on the bonding bill and the wastewater treatment plant project. Currently, the plan is to take bids due at the end of January; this is to be sensitive to the bidding climate over the holidays. There is no commitment yet on the amount of grant dollars; this will be figured out in December.

City Administrator Michelle Quinn updated the council on the renovation of the new community center and project budget. The council accepted the easement agreement needed and gave Quinn and Councilwoman Emily Krage the decision making power for choosing an appropriate lighting package. Councilwoman Cheryl Sanden was given authority to select countertops and restroom sinks. Sufficient space will be left for the possibility of a commercial refrigerator in the future. The contingency fund for the project is at $4,628, but a good portion of the project is completed.

The council discussed options for the Maple Street community building and decided to put the structure up for sale, asking for a business plan and timeframe with the right to refuse all bids. As councilman Tony Schultz noted, “We don’t want it just sitting empty.” The building is zoned commercial at this time. The intent is to sell the building “as an empty shell.”

Cheryl Sanden suggested, “We need to check with Murphy and see what kind of stipulations we can put on it.”

Randy Thesing asked what the council wanted done with the leaking eaves of the building. The council agreed that they had a responsibility for public safety and directed Thesing to get an estimate on repair.

The building will not be available until at least spring. Stored items belonging to summer rec, Hoedown Committee, and the Legion will need to be relocated.

• Learned from Randy Thesing that it was time to start looking for a replacement for him eventually. In order for someone to receive proper credentials, they must spend three years in wastewater management;

• The Cedar Street leak had been repaired; there had been a split main leak near where the service for the new community center had been added.