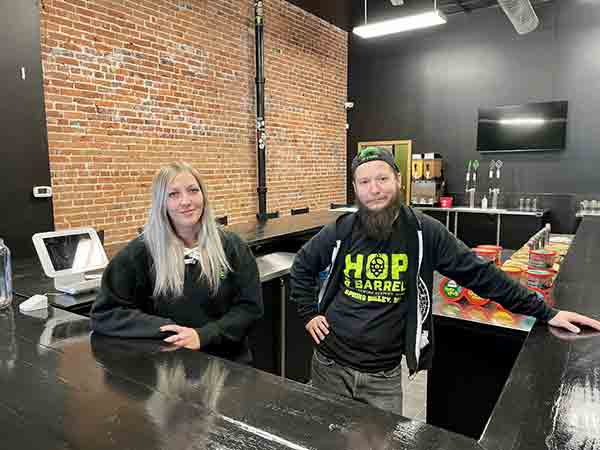 Jason Pahl calls Hop & Barrel – the new craft brewery in Spring Valley – his playhouse. That’s because he is the head brewer and loves his job.

“I’m a research nut,” he says. “I love figuring out how styles were traditionally done, trying to adapt that to modern ingredients and then finding a way to make a style that is true to style, and finding some ways to play with it and make it your own.”

Most of the beers Hop & Barrel serves are brewed in-house and – thanks to Pahl’s creations – unique to the Spring Valley location. But Pahl has an advantage not many other small craft breweries have. That’s because the brewery has a sister location in Hudson, Wis., which opened in 2017. This allows both locations to swap kegs, should they run low or want to introduce a brew that’s become popular at either location.

“Since we’re under the same umbrella, we are able to ship back and forth and don’t have to deal with a distributor. That’s a safety net for me,” Pahl says.

Hop & Barrel is the brain child of Justin Terbeest and his partner, Brian Priefer, according to Dani Terbeest, who is Justin’s brother and general manager at the Spring Valley location.

“My brother was a lawyer and did some home brewing and then met Brian who had started up a few breweries,” she says.

Last year, they eyed a location in Spring Valley and originally considered the old bakery but held off. When the current building – which last housed Sheldon Plumbing & Heating – became available earlier this year, they pulled the trigger. Renovations ensued followed by the grand opening on November 17.

“The opening cleared our inventory pretty well,” Pahl says. We had four of my original brews and two from the Hudson location, and now we’re sitting at four and four.”

Pahl’s four brews currently offered are Firstborn (a Midwest IPA), Lakeless (an American Pale Ale), Barenaked Oats (an American Stout) and Mixology (a double hard seltzer base flavored to order). Pahl says he is also excited to start a mixed fermentation sour brew with barrel-aged sours that will sit for a year after fermentation – a rarity for a small brewery.

Unlike the Hudson location, Pahl and Terbeest say the Spring Valley location is unlikely to distribute beer to area liquor stores and restaurants anytime soon, though crawler off-sale is in the works.

“Thankfully, with the Hudson location, if something takes off here, we can build up the recipe to their system and distribute through there. That also takes pressure off our system,” Pahl says.

Hop & Barrel strives to be more than strictly a brewery. The facility can hold 86 people and is divided into an area with a large, U-shaped bar and another area with individual seating, a small stage for performers – with musical acts schedule on most weekends – arcade and board games. Outdoor seating is also being planned for the future.

“One of the things the owners pushed is that it is a community center with beer, so they want people to come in and enjoy the space regardless of the reason,” Pahl says.

While Hop & Barrel does not have a kitchen, Terbeest says patrons are welcome to bring their own food or have it delivered. She is also working with Stellar 181 Tap House down the street to make their menu available to Hop & Barrel’s customers.

Pahl has been brewing for almost a decade. He began an apprenticeship at Grand Rounds in Rochester in 2017, which led to a full-time job at their production facility in Pine Island, where he stayed for a year and a half before becoming head brewer at Hop & Barrel.

He says he enjoys creating new brews and that breweries are rising in popularity.

“The industry is changing. People are gravitating toward the smaller shops when it comes to breweries,” he says. “And our offerings will always change. The taps are going to rotate depending on what’s available, what’s selling, and I what I come up with.”