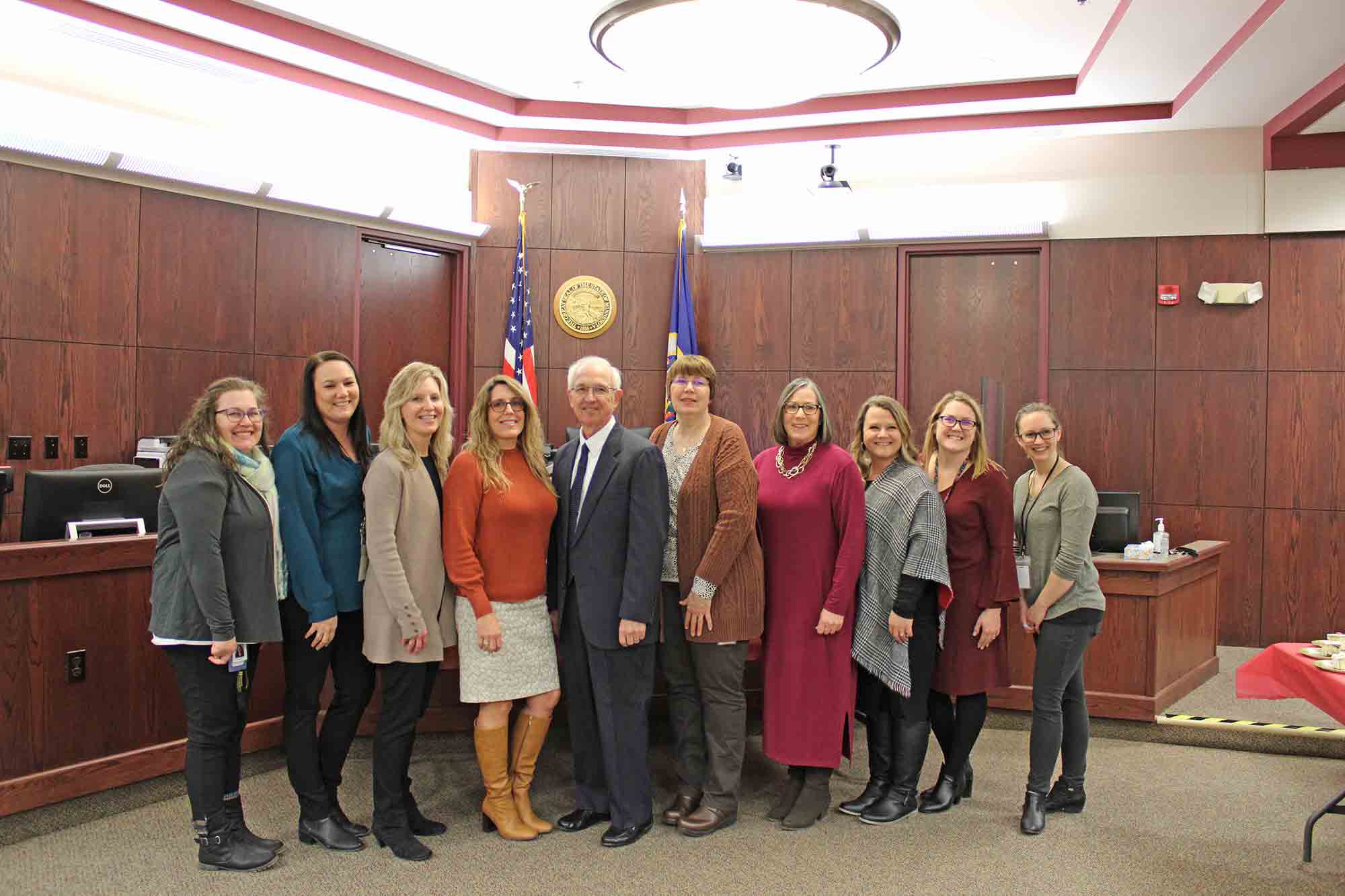 The Fillmore County District Court had a full house on Wednesday, November 30, 2022.

Hundreds of people from near and far funneled in and out of the courtroom to congratulate Judge Matthew Opat for his service to the area.

In the State of Minnesota, judges are required to retire at the age of 70, which is why Opat was signing off as a full-time judge.

It was apparent that he enjoyed working with the court administration team, and likewise they were going to miss seeing him each day on the job.

Their family eventually moved from rural Elma, Iowa, to Lime Springs, Iowa.  He went from a one room schoolhouse in Schley on to graduate from Crestwood High School in Cresco, Iowa, in 1970.

Right out of high school, he enrolled in the pre-law program at University of Iowa to earn a degree in history – graduating in 1974.  From there, he pursued a law degree at Midwestern School of Law in St. Paul, Minn.  That law school is now known as Hamline School of Law.

After three years, Opat graduated with a law degree in 1977.

Then his life became super busy.  That summer, he passed his bar exam in Iowa in June, and then he took the bar exam in Minnesota in July.  In August of 1977, he married his wife Therese.

At that time, in Minnesota, it took a few months to find out if you passed the bar exam.  Until the end of October 1977, Opat helped out at any law offices that would welcome his talents.

At that time, there were two law offices in Chatfield, Minn.  Jim Perkins, known for his leadership and involvement in the Chatfield Brass Band, was one of the local attorneys.  The other one was Marvin Ohlrogg, who started practicing law in Chatfield after World War II.

It was a small law office.  Marvin’s wife Mary was the secretary.  Opat shared office space with Ohlrogg, developing his practice in the areas of real estate, probate, business, family law, and anything else that came along in the local communities he served.

His career path to judge

In 1981, Robert Benson was running a private law practice in Preston, Minn., while also serving as a part-time county attorney.  It was becoming too much to handle, so Opat came on-board as the assistant county attorney.  He would serve in that role from 1981 to 1997.

Over the years, Opat and Benson, who had worked together as county attorneys, respected each other greatly.  And, that’s why Benson suggested Opat should seek the position of judge when he planned to retire in March of 2013.

During his time as a judge, from 2013 to 2022, Opat has enjoyed making a difference in peoples’ lives.  “I knew for them, this case was the most important case in their life,” he said.

Opat continued, “It’s a hard decision any time you send someone to prison or terminate someone’s parental rights.”

Adoptions were considered one of the better days in the courtroom.

In recent years, with the pandemic, he has witnessed a change in how the courtroom functions with the introduction of technology – exponentially catapulted into the future by the pandemic.  He recalls that just a few years ago they were signing court documents by hand.  Everything was on paper.  Now everything is done electronically.  From filing exhibits to Zoom hearings, the courtroom has changed dramatically in a very short period of time.

He will certainly miss his daily routine at the courthouse.  He will miss his co-workers the most.  “This has been like a family here.  We would all eat lunch together.  We would all sit down together and we knew what was going on in each other’s lives,” expressed Opat.

His coworkers echoed his sentiment.

Court Administrator Lauren Hanson offered this. “I was so fortunate to work my first year as a court administrator on Judge Opat’s team. He is kind, welcoming, compassionate and extremely empathetic to not just the team in Fillmore Court Administration, but to anyone he comes in contact with. It doesn’t matter what your background is, he treats everyone the same.”

“His work ethic and commitment to his job have always been second to none.  I feel truly honored to have worked with him for the past 9 1/2 years,” shared Court Reporter Debbie Grebin.

Law Clerk Megan Pierce-Campbell added to the praise, “He never missed a birthday, always celebrated a work anniversary among his judge’s team as well as within court administration, was genuinely interested in the lives of those around him, asking about everyone’s spouses and kids, etc.  I don’t know that I have ever met someone who makes giving to others and caring about others look so effortless. It was easy to get up every day and go to work because of the team that I worked with and the leadership Judge Opat provided.”

Over the years, outside of the courtroom, Opat has found many things to fulfill his life’s ambitions.

Matthew and Therese raised three children.  Their son Mike is an engineer in Fargo, N. Dak.  Their daughter Kristin Bray is a high school art teacher in Red Wing, Minn.  And, their other son, Steve, is a flight nurse in Alaska.

While Opat has followed his dreams in the courtroom, Therese worked at the Mayo Clinic and served as the secretary and bookkeeper for St. Mary’s Catholic Church.  She eventually absorbed those responsibilities for a conglomerate of Catholic churches in the region.

For hobbies, Opat enjoys growing pumpkins on an acreage their family owns outside of Chatfield.  He especially enjoys tooling around on a few tractors that have been in their family for generations.  They have a 1953 Super H, a Farmall H, and an F20 (his father’s first tractor).

He has also enjoyed serving the community as a volunteer with the Commercial Club, Chatfield Rotary Club, Chatfield Lions Club, Chatfield Fire Department (21 years), Chatfield FFA Alumni Association, St. Mary’s Catholic Church, and Chatfield Center for the Arts.  He has even helped out with the chain gang for Gopher football games for more than 30 years.

While Opat officially retired on November 30, 2022, that won’t be his last day in court.  There are 24 judges in the 11 counties that make up the Third Judicial District of Minnesota.  And, there’s been a shortage of judges for a number of years.  Opat will be stepping in to help on a part-time basis, as needed.

Matthew Opat, who was once inspired by the TV character Perry Mason, became a lawyer, a judge, a volunteer, a father, a husband, and a community leader.  Not too shabby for the Iowa farm boy.

To quote Perry Mason, “A toast to the things for which there are no substitutes: good friends… happy days… and… victory.”