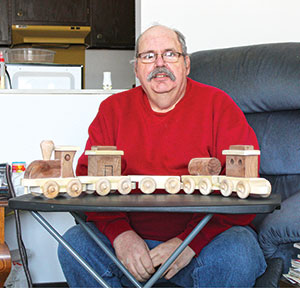 It all started in high school when Paul Klockeman’s shop and industrial arts teacher, Richard Wildgrube inspired him to develop an interest in woodworking through a class called Building Trade. Truthfully though, it was probably already in his blood. Although he never met him, Klockeman believes his grandfather was a carpenter as well. His father did some woodworking and a number of Klockeman’s five siblings also have an interest in it.

Klockeman knew that he wanted to work in carpentry so after he graduated from high school, he applied to the North Hennepin Technical School in Brooklyn Park, Minn., on the recommendation of his older brother, Ernie. When he was accepted to the school, he enrolled in an 18-month program to learn the cabinet making trade. After graduating in 1985, he worked at a cabinet shop in the Twin Cities for about eight months before realizing that he didn’t actually like living in a big city. Several years earlier, while he was still in high school, he had set up a woodworking shop in his parents’ garage in Fountain and so he moved back in with them and found a job locally.

His woodworking never turned into a full-time business, but Klockeman enjoyed working at various cabinet and other woodworking shops in the Fillmore County area while keeping up with projects for family, friends and others in his garage shop. Doing so allowed him to gain lots of experience with different types of woodworking including building cabinets, sofa and ottoman frames, a variety of furniture, and even pet cremation urns. Some of the places Klockeman worked for eventually went out of business, but some are still going today such as Bob Redalen’s Pet Urns by HTW out of Chatfield. Klockeman and Redalen had been neighbors and friends for over 30 years and even worked together at woodworking and craft shows.

Klockeman’s favorite job was one he had at Woodtech in Chatfield from 2001-2005. His duties included cutting parts out of wood, building and installing cabinets, and more. “That was the nice thing about working in a small shop is you get to do a little of everything,” he said. “I used to look forward to Mondays because of work.”

In between jobs, Klockeman worked on projects for family, friends, and others. “I caught up with projects whenever I was off work,” he explained. His most unique commission was a cow shaped table with a flat top for a lady who lived near Preston. When he was finished with it, the customer painted it to look like a Holstein cow.

A few of the many projects that Klockeman has made in the past include cedar chests, andirondack chairs, dressers, cupboards, rocking horses, benches, and even church pews for the St. Ignatius Catholic Church in Spring Valley. He had a large collection of tools that he began purchasing in 1981 for his shop. “Guys would come in there and say, ‘look at all the tools you got!’” Klockeman said. In 2019, he moved from his home in Fountain to an apartment in Spring Valley and had to sell all of those tools. “That was hard,” he said.

Now that Klockeman is semi-retired without a big shop full of tools, he has changed his focus from big projects to smaller ones such as toys, which he first started making around 2012. As he doesn’t have space for equipment in his apartment, he has a few tools set up in his friend Gary Lund’s shed so he can cut out the pieces he needs for the toys. As he gets older, he finds it helpful to be handling smaller pieces of wood rather than larger ones.

Over the years, Klockeman has made a lot of wooden toys, including as gifts for his many nieces and nephews. Some of the toys he has made include semi trucks complete with flat bed trailers, pick-ups, SUVs, fire trucks, trains, and even decorative deer. He is especially proud of his fire trucks that are made in the style of fire trucks from the 1980s with lots of details such as ladders that hook onto the sides, black cord on wooden spools for fire hoses, lights and sirens, etc. He’s also sold quite a few of his wooden trains that come complete with an engine and a variety of cars.

A lot of Klockeman’s work comes from word-of-mouth advertising, and he also enjoys attending craft shows in the Fillmore County area to sell his handmade wooden toys. The pandemic has put a damper on that for the time being, but he is excited to get back to craft shows when the time is right. Anyone interested in purchasing wooden toys from Paul Klockeman can reach him at (507) 458-9930.