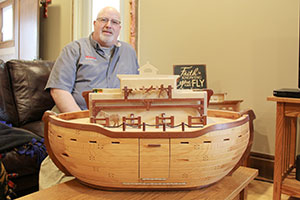 When most people think of relaxing after a long day at work, they might think of sitting down on the couch and catching up on a TV show or going for a walk. Not Andy Walsh. His relaxing hobby is woodworking, which incidentally is also his day job. The two are not the same though. “All day, I work on big stuff,” Walsh said about his job as a union carpenter in the Mayo Clinic cabinet shop. “What I do for a hobby is completely different. For me, it’s relaxing.” He was especially thankful for his hobby during the pandemic when he was working 10 weeks straight of overtime trying to keep up with COVID-specific projects such as making dividers and shields. “It was taxing mentally. It was relaxing to come home and do woodworking,” he said.

Ever since he can remember, Walsh has had an interest in building and creating things out of wood. He started young, building a treehouse, making a go kart, and more. “As long as I was hammering nails and cutting wood, I was happy,” he said. “I remember buying power tools when I was 10 years old.” At the time, he was building a treehouse and needed a power saw so he went down to Ebert Hardware in Preston and bought one. Walsh’s talent and interest in woodworking is all his own. “My dad didn’t know what side of a hammer to use and he was self-admitted at that,” he laughed. “My parents had five kids and whatever we each did, they just supported us.”

Walsh considers seventh grade to be when he really got serious about woodworking. His shop teacher, Dick Wildgrube, helped to foster and instill a passion for woodworking in him that has stayed with him to this day. At 17 years old, Walsh’s high school shop

project was a beautifully detailed rolltop desk that he gave to his parents and now sits in his own home.

Although Walsh has always kept up with his woodworking hobby, he did change his focus some when his two kids were younger. He remembers sitting at the table next to his daughter’s high chair when she was a baby and carving small figures out of wood, something he stopped doing once his kids were a little older and more independent. “It was perfect for that stage of life. I could sit right next to her and still be working on something,” he said. In the last six years, he’s gotten back into doing more projects now that he and his wife Maggie are empty-nesters. “My wife and I can only sit and stare at each other for so long,” he laughed.

Walsh prefers small projects to big ones. His garage also serves as his shop so he doesn’t have an abundance of space to work on bigger pieces. “I have a very understanding bride, which I’m thankful for. She just lets me do whatever out there,” he said, noting that sometimes even small projects can take up quite a bit of room in the garage/shop.

Walsh generally doesn’t make things to sell, preferring to keep his woodworking as a hobby, not a business. “If I sell it, it kind of takes the fun out of it because then there are deadlines,” he explained. “We work under deadlines at my day job. I don’t want to come

home to the same thing.” He does make some exceptions though such as the wooden themed “thin line” flags (firefighter, police officer, EMS, nurse, teacher, etc) he made from August to December of 2020. He sold a total of 31 flags with some of the proceeds from each one going to the Servicemen’s Club in Preston. While he didn’t mind doing that, he doesn’t want to make it a regular thing.

“I learn with every one of them,” Walsh said about his projects. He has an eye for detail and does his research to make sure he gets everything right on a piece. While he does use patterns, he adds all of the extras and details himself, using pictures and even going to see something in real life to get a better handle on how it works. The only pre-made parts of his pieces are some of the smaller wheels. Everything else starts as a basic piece of wood and is crafted into whatever he needs. Some of his recent projects were tractors and an excavator complete with a semi and trailer to load it on. The excavator set took Walsh over 100 hours to complete. “I couldn’t sell that because how do you even put a price on it?” he said. If Walsh is working on a less time-consuming project, he will sometimes make two and give the second one away as a gift, but he keeps most of what he makes.

Walsh has made a few things that are meant to be played with, one of which is a large Noah’s Ark that opens to reveal two inner decks filled with wooden animals and enclosures for them. He noted that his niece enjoys playing with it whenever she visits. However, most of what he creates is for display only. “They’re heirlooms, not toys,” he said. He figures that someday they may be able to be passed down to grandchildren.

Walsh doesn’t have a favorite project or type of thing to make and his interests change over time. “Whatever I’m working on right now is my favorite,” he explained. He has no plans to stop woodworking and hopes to continue his hobby into retirement someday. “I call it my therapy,” he said.