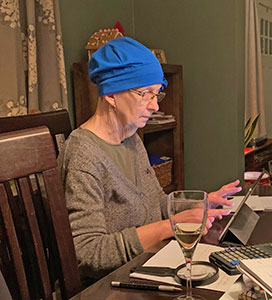 It has taken me a considerable amount of time, to really think about the message that I came here to write today, knowing that I am attempting to fill very large shoes.  So, please forgive me if I don’t quite measure up to the weekly column you have all looked forward to reading week after week.

One of my mom’s greatest accomplishments in life was to be the author of a history column, featured in her local weekly newspaper.  It allowed her to turn all of her priceless treasures into life, in a sense.  Retelling the story of each postcard, picture, book or artifact that she had collected over several years, through her eyes and stroke of the keyboard, filled her heart with such joy.  It is something that gave her great purpose as she neared retirement in March of 2020.  A year that would prove to shake our world to the core and ultimately find her leaving a career of 37 years with F&M Community Bank, with a pending retirement party once it was safe to gather indoors with groups larger than 10 or so people.  That retirement party was never meant to be.

Shortly after she retired and while she gathered steam to put pen to paper and write a book that had been brewing in her mind for years, she received the gutting diagnosis of stage IIIC ovarian cancer.  The worst kind, incredibly rare, and often slow to respond to treatment.  But, she kept her head high, was confidential with most about her diagnosis and looked forward to the armor she would need to fight this beast, as best she possibly could.  My role as daughter quickly transitioned to that of caretaker and I moved her to my house in St. Paul as we planned her initial surgery, followed by six chemotherapy treatments at Mayo Clinic in Rochester.

Our first celebration was after her second treatment, she was a third of the way done and so elated that she hadn’t had many side effects other than some fatigue for a few days, occasional aches and mild neuropathy.  We would often celebrate with a special dinner and chat on my deck in the backyard.  It was one of her most favorite places to gather, where conversation would flow freely as the day would come to a close.  Shortly before her final two treatments, she began to experience more prominent symptoms, similar to those prior to her initial diagnosis in June.  A reality that left us all with a sinking feeling that perhaps the cancer had returned and continued to grow.  But she never, ever gave up hope.

She finished her final treatment on November 20 and enjoyed just shy of four weeks before a follow up appointment on the 16th of December that would bring her to her knees in sorrow.  The cancer had continued to grow through the final chemotherapy treatments and there was nothing more that could be done to treat it.  It was in fact, incurable.  The tears flowed as she quietly tucked her question filled notepad back into her purse.  None of those questions mattered anymore, her future was different and final, yet her weekly column always remained at the top of her mind.  It became very evident to me that writing her column, during the times that she felt well enough, provided her with an escape of sorts, to a time many years ago and with people that were now in the place where she would soon arrive.

Over the next two months, she would write her column as often as she could, and with the help of my oldest child, who would type as she dictated.  There were a handful of times that she just was not well enough to submit a column, and it bothered her so.  She would talk about it often, and say that she would try to do the work ahead of time, and on the days that she felt best, so that she did not miss another week.  When the hospice team started to come to my house each week, she would spend the majority of her time talking about her work as a writer and historian, capturing the attention of each audience she encountered.  This weekly column was so important to her and she had such grand plans for the years ahead of her, where she could shape and mold it in a whole different way.  She looked forward to putting Preston on the map, unearthing treasures most are unaware of, but that was not to be, in the end.

In the final weeks of my mom’s life, we talked often about how wonderful it would be for her to pencil a final column, something to give her readers as they simultaneously read her obituary, after she had passed.  But the more I pushed, the more she would pull, until I finally realized something very important.  When you are given the sentence of an advanced ovarian cancer diagnosis, with no possible treatment to cure the disease, there are few things that can give you hope that your situation might possibly be different.  The last thing anyone would want to do is sit down and write a goodbye to an audience that had followed years of beautiful moments and memories that made up the very town and community she was a part of.  The realization that she too, would soon be part of that history, someone that generations to follow, would come to know.

As the weeks passed and the moments of her writing her column at my dining room table vanished, I realized I needed to be capturing her hard work and determination, as often as I could.  This picture of her writing her column on December 19 was just three days after she received the news that her days were likely numbered.  I had convinced her that we could share in a glass of wine together, as I wrapped Christmas gifts and she worked diligently on the column that would be published before the holidays.  This would be one of the last times that she was able to do her column completely independent of the help of my daughter.

My mother passed away Thursday, February 18, very early that morning.  The days leading up to that, she was almost completely uncommunicative, other than a few moments of clarity here and there.  One of the most profound moments she had with me was when she frantically asked where her iPad was, that I needed to find it and hold it for her.  After I assured her that it was safe in my hands, she responded, “good, I have to write my column.”  What a profound and beautiful gesture, that in her final moments here on Earth, she was thinking about the next column submission that was due.  I picture her now, writing at her leisure, likely on the second or third chapter of the book she had always intended to write, and at peace with her beautiful maker.  She will be missed infinitely, yet knowing the remarkable time she must be having as she meets the many who passed before her, brings me immeasurable peace.  And I hope it does you, too.