Nothing makes me more pleased than to be able to tell you that I have been hired by Jason Sethre to continue writing the column I wrote for the Fillmore County News Leader, the newspaper he recently purchased from David Phillips.

I’m thrilled to be a part of the Fillmore County Journal team! Only one small change – the title of my new column once known as “Historic Memories” will include three additional words to signify that my stories will be about every town in Fillmore County!

Earlier this year we did a stroll around Preston’s downtown square, seeing pictures of all the businesses that surrounded the old Fillmore County Courthouse. What better way to start out our new adventure than to include a picture of it, a place that every county resident will use at some point in their life!

Many of you have fond memories of that fabulous old courthouse. The historian part of me believes that the younger generation should have the opportunity to enjoy pictures of what once stood stately on Preston’s downtown square!

Being born and raised in Preston, I have vivid memories of that idyllic building, surrounded on all four sides by quaint cobblestone streets. A bandstand stood on the southwest corner of the lawn where summer band concerts and ice cream socials were held! On the opposite side, the southeast corner, there stood a huge, civil war canon. A vast halo of mature trees dotted the grounds, simply gorgeous! 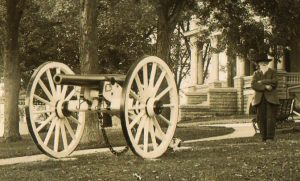 When I was a child, my siblings and I walked to and from school every day – from the south hill neighborhood, past the courthouse and past three beautiful churches: Preston Methodist Church, Presbyterian Church, and German Lutheran Church. I am not young anymore, yet the images of those magnificent buildings remain crystal clear in my mind. But please don’t worry, we’ll visit each one of them soon as we recall together, the history of Preston.

Throughout the years, several postcard views of the courthouse emerged. Today’s picture is one of my favorites! Imagine you are standing on the corner of Fillmore and St. Anthony Streets, in front of the F & M Community Bank, and you are glancing across the intersection. Over 100 years ago this is the scene you would be enjoying, captured by early Preston photographer, Lawrence P. Weller! 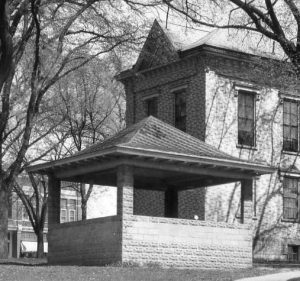 You can see the huge dome that rested on the top of the building. Many years ago, Preston historian, the late Richard Hovelson, told me that as a child he remembered seeing the dome strung with Christmas lights each December. He said he could see them twinkling in the winter skies as one approached Preston from any direction. Unfortunately, I personally have no memories of that at all!

I am glad Mr. Weller snapped this picture on the north side of the building so that all of these years later we get a clear view of the impressive north portico of the structure. Although the massive trees covered up a large portion of the building, one can clearly appreciate the fact that the old courthouse, indeed, commanded the respect of all who entered therein.

In 1968 my family moved into the home where I still live in Preston. Our next door neighbors, were Tim and Genevieve Grebin. Tim held the position of Preston City Clerk and in my opinion was another “walking historian” as well! He told me once that when it came time for the old Fillmore County Courthouse to be demolished and replaced, he tried to convince the County Commissioners to save the structure and transform it into the Fillmore County Museum. Can you even imagine how awesome that would be today to still be able to have that building on our downtown square? “Hindsight is 20/20!”

More of Lawrence P. Weller’s photographs will appear in upcoming columns, I know you will enjoy each one because they are just as fabulous as this one!

Next week will find us traveling to another historic destination in Fillmore County, so please, stay tuned!