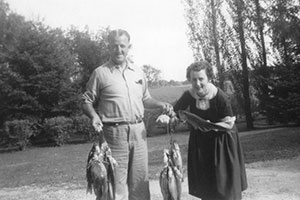 Last week you met six of the eight children born to Joseph H. and Sadie (McNulty) Drury. However, I explained that the old photograph didn’t include three of the children – Pearl, Robert, and Donald. I searched our family photo albums and came up short finding any pictures of the three of them when they were children. But I did find three very nice pictures of them, as adults.

You will no doubt conclude from the photos that the Drurys loved to fish! I can’t even begin to tell you how many pictures in the albums contain images of fish!!!

My Aunt Pearl lived in Oklahoma City for as long as I can remember. But every summer she  made a trip back to Minnesota to visit all of her siblings and their families. And, of course, there was always time to do some fishing too.

Obviously, Donald Drury loved to fish as well, and the picture of him along with his “catch for the day,” some beautiful trout, proves that point.

The picture of Robert and Reuben Drury is really special. We always referred to Robert as “Uncle Joe” or “Uncle Bobby.” He was a trapper by trade and sold furs far and wide. I don’t know when the picture was taken of the two men, but it is a great photo!

Last, but not least, is the photo of the Drury children’s father, Joseph H. Drury. Pictured here with his team of horses, his dray line cart, and the Chicago-Milwaukee-St.Paul train in the background, he is obviously on his way to work, as he travels toward the old Preston train depot.

It was fun sharing a bit about my family’s roots with all of you and I hope you enjoyed it as well.