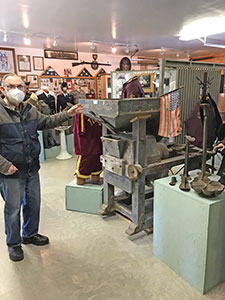 Peterson, Minnesota, a small city of 188 residents, is home to a treasure of a museum with much to offer. The Peterson Station Museum is bursting at the seams with artifacts — so much so that the Friends of Peterson are currently raising funds to add on yet another building to the current museum.

A plethora of artifacts greet the museum visitors as they enter the museum. Housed there are four kubbestols log chairs created by local artists Halvor Landsverk, Paul Agrimson, and Marlin Harvey Langseth, Vesterheim Gold Medal Carver (to be given this title, Langseth had a kubbestol judged at Vesterheim to be absolutely perfect with no errors.)

There are examples of several French Burr Mills which were patented in 1900 by John O. Ensberg and manufactured in Peterson. French Burr stones were imported from Marne Valley in France; the mills were used for finer grinding of wheat.

The museum also houses model steam and gas engines created by Clifford Berge; the millstone from the John Smelby mill, a water-powered flour mill located on the Root River in Peterson; wood carvings by Nels Jacobson; art from Ada and Ray Kjos; rose malign by former Peterson teacher Bob Anderson; a book, Runic Records of the Norsemen in America, written by Ole Landsverk; a trunk belonging to the town’s founder, Peter Peterson Haselrud; and an extensive display of service uniforms and photos of every person with a Peterson address who served since WWI to name just a few!

Curator John Erickson was always interested in local history; in 1969, he visited with some senior citizens in Peterson and asked to copy some of their photos. Copies were displayed at City Hall; his effort was dubbed, “Save Peterson,” and Erickson was on his way to keep the memories alive in Peterson.

In 1971, Erickson saw a for sale sign on the depot located between Prospect and Park Street and owned by the Milwaukee Railroad. He was informed that the depot would need to be moved; he submitted a bid for $1.00 with 90 days to move it. Jean Volkman’s mom donated the current land for the depot, and Hans Haef from La Crescent moved the depot, donating over half of the $4,000 bill. Since the streets of Peterson were being redone in 1973, it was the perfect time to move the depot without incurring additional expense for road repair. Mayor Earl Hoff got the deed transferred to the City of Peterson; the Green Thumb Project painted the depot with the original gold colors.

In 2001 an additional building was added to the museum; since the original land was just large enough for the depot, more land was needed. The land in back of the depot went up for auction and was originally purchased by the Peterson Investment Club (PIC). Curtis Johnson, the group’s financial manager, offered it to Erickson for less than $1,000. Erickson purchased the land and had this land also transferred to the City of Peterson.

Erickson stresses that this is NOT his museum! The museum belongs to the City of Peterson and always has. He jokes, “Darlene (his wife) has had to deal with my girlfriend — the City of Peterson — all my life! My effort is always collecting — to keep improving (the museum). You have to have a purpose in life!”

Currently Erickson is assisted by volunteers headed by Gail Boyum. Gail lines up volunteers as well as volunteering herself; she serves as a liaison between the museum and City Council. Friends of Peterson run the city celebration, Gammel Dag, write grants for things such as the summer music series in the band stand, and help promote Peterson with the blessings of the city and museum. Boyum shared that the music series will start off July 18th with Mollie B and wrap up with the Rutabaga Brothers.

With the retirement of a former employee, the museum is searching for someone who would like to supplement their social security income by working 20 hours a week at the museum.

Erickson welcomes the volunteers and staff, commenting,  “You always need fresh blood with fresh ideas — we all see things differently.”

The museum welcomes researchers; it offers 220 genealogies of local families as well as 118 Bygdeboks from Norway along with an extensive collection of cemetery indexes with obituaries, church records, and copies of local newspapers.

Visitor numbers have grown through the years; in 2019 more than 1,200 people visited. The museum is open seven days a week from Memorial Day to October 31 with a freewill donation admission.

Donation items come into the museum on a weekly basis. Recently, the new owners of the former Peterson High School donated the photographs and trophies from the old school.

When Boyum and Erickson were asked what items in the museum were the most important or notable, they had a multitude of things to mention—the fire engine, a book that sold for $600 on eBay, a photo display from the Ruth Black family, the kubbestols, and assorted artwork such as chalk work, paintings, and drawings. Obviously, each person has a different perspective and appreciation; the reader is encouraged to visit and see the collection for himself or herself!

The museum’s goal is to raise $60,000 to build a 20×36-foot building in back of the station and a previous addition. The dimensions are limited by current power and sewer lines; however, with a 14-foot ceiling, maximum space will be claimed for the museum. Architectural plans for the addition have been donated by architect Larry Maimin. The American Legion donated $10,000 and AcenTek donated $4,000 as well as the necessary cable and phone connections for the project. Thompson Brothers Sand and Gravel and Darrel Simon donated soil preparation. Now the Friends of Peterson group is reaching out to individuals via letters and ads in the Fillmore County Journal asking for help in the final funding push for the remaining $7,700 needed.

The new building will be dedicated to the school with school artifacts currently located around the museum moved into the new area. The Friends of Peterson group is running a fundraiser silent auction with items such as a Norwegian sweater, Porsgrund Hearts and Pines pieces, four antique kerosene lamps, quilts and assorted dishes. Descriptions and pictures will be posted on the Friends of Peterson Facebook page (www.facebook.com/FriendsOfPeterson).

The museum has a well-used bike share program and recently helped create a walking tour of Peterson with the contributions of photos and information by Erickson.

Gail Boyum emphasized, “People think that when John (Erickson) is gone, the museum will close. There are people who are interested (in carrying on). This is not John’s museum; it belongs to the city of Peterson! It takes a commitment.”

Will the City of Peterson accept the challenge and “Save Peterson” as John Erickson first encouraged in 1969? Will you help? Donate by mail to 2020 Peterson Station Building Fund, P.O. Box 233, Peterson, Minn. 55962. Donations are tax deductible; Friends of Peterson is an official 501(c) organization.