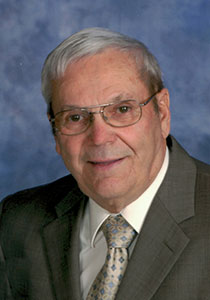 Hank was born June 22, 1934, in Canton to John and Ruth (Helgeson) Selden.  In 1952 he graduated from the Canton High School. For a short time, he worked in tuckpointing and had lived in Duluth before returning to Canton where he farmed for 45 years.  On August 6, 1955, he married Rita Carolan at the St. Bridget Catholic Church in Bluffton, Iowa. On their farm south of Canton, they had a dairy and beef herd, and also raised hogs.  Hank and Rita later moved into Canton where he operated Hank’s Clock Shop, making and repairing clocks, and making various pieces of furniture. He also enjoyed camping and fishing. They were active members of Assumption Catholic Church in Canton.  He had also been a 4-H leader, and served on the Canton Township Board and the Canton City Council.

Hank is survived by his wife Rita of Harmony, two sons, Mike of Winona and Pat (Shelly) of Huntsville, Ark.; five grandchildren: Jon of Winona, Missi of Osage, Iowa, Addie (Nate) Freiermuth of Rosemount, Minn., Dustin of Canton, and Sean of Canton; great-grandchildren Skye, Shyann, Zane, Hunter, Ben, Carter, and Jaxson; and several nieces and nephews.  He was preceded in death by his parents and two brothers, Ronald and Robert.