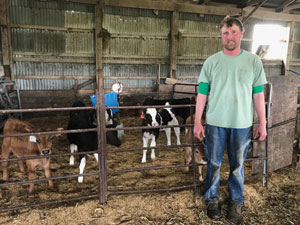 One of the traditional images that represents the Fillmore County area is a herd of dairy cows out grazing in the pasture.  Over the years, small dairy operations have become less and less common.  But for Olaf Haugen, and his parents Vance and Bonnie Haugen, it’s still their way of life, and they recently gave a peek inside their farm and lifestyle.

The Haugen farm is located a few miles outside of Canton, on Deer Road.  Vance and Bonnie started their dairy farm in 1993, and from the start, they chose to implement rotational grazing.  Vance explained, “What we do a little bit differently here, instead of bringing all of the feed to the cows, and the cows staying in one place, we have, for six to eight months of the year, depending on how the growing season is, we bring the cows to the feed.  And that’s been a real economic improvement for us.  It’s kept us in the dairy game.  This particular system, since we’ve got lower investment, gives an opportunity for people to stay in the business.”

Vance explained that their son Olaf has taken over managing the farm, Bonnie does most of the bookwork, and Vance does “a little bit of running around, but that’s about it.”  They also have a hired hand.  Vance said Olaf had been working at John Deere, and only considered changing careers if he could get a comparable income.  Vance said so far, the dairy has fulfilled that expectation for Olaf, and he now lives with his own family, just a couple of miles from the farm.

The Haugen farm has around 200 cows, and they are Holstein and Jersey base, with Norwegian Reds and Normandy.  Vance pointed out that there are six major breeds of U.S. dairy cows, but added, “If you cross-breed, you get hybrid vigor.”  The farm totals about 270 acres, and the Haugens have learned the most efficient ways to fence off and rotate the pastures to be used.  Vance stated, “About every 12 hours, they’ve got a new place to eat… that’s rotational grazing.”

Another difference, according to Vance is, “Most dairy farms run 365 days out of the year.  We choose to dry everything off in January, take a month and a half or two month break.  One advantage to this seasonal system, according to Bonnie, is, “When a calf is born, when the cow needs nutrition to ramp up for their milk production, because we’re grazers. We try to have them freshen so as their nutritional needs are increasing, that’s when the best grass is available for them.”

Over recent decades, technology and evolving policy have created many changes and challenges for the dairy industry.  Vance stated his opinion that, “Times are changing.  The dairy industry is changing.  In 20 years, we’ve lost two thirds of the dairy herds in the U.S.  And it’s nothing evil or nefarious, it’s just a policy decision.”  These changes, according to Vance, are making it tougher for new dairies to start up and succeed (especially smaller operations), but he adds that there are also unique challenges for large operations, such as liquid manure systems.  He also explained that larger dairies require larger milk hauling trucks, which are much heavier and therefore hard on roads.

Olaf pointed out that the dairy industry is developing a number of “niche markets” such as non-dairy milk (almond milk and similar products), organic milk, grass-fed milk, etc.  These products have all tended to demand a higher price in the store, but some consumers are willing to pay that.  For the bulk of the market, though, low price is still the name of the game.  So dairy producers are continually striving to find ways to be more efficient, and to control costs.  Vance explained that one advantage of a rotational grazing dairy is the ability to have less buildings and equipment, saying, “We choose not to have any major buildings… Free stall barns are running anywhere around $2,000 to $3,000 per stall… We built a milking parlor ourselves back 20 some years ago.”

Vance expressed his feeling that, “I personally want to see more livestock on the land, and I want to see them on the land correctly.”  He also stated that one result of the current trend of fewer small dairies, is fewer and fewer young people growing up on dairy farms, meaning there are less people likely to go into the dairy industry.  The Haugens say they like what they do, and they intend to keep doing it. Vance summarized their operation as, “What we do is A way of doing dairy, it’s not THE way… The dairy industry is still a pretty good place to be.”