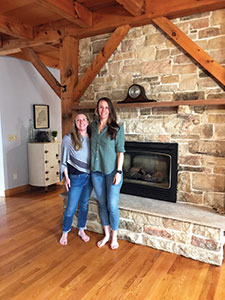 Jessica Hatlevig Bell and Elisa Hatlevig have just opened up their Airbnb near Peterson. “We needed to open our house and our hearts to others,” Elissa commented. They have decided to share their family treasure with the public to honor their parents, Ronald and Jacqueline Hatlevig.

The home is built on the family farm, which was originally established in 1894 by Ron’s grandfather. Ron himself was raised in a house on the property at a different area of the farm. Other family members including his great uncle had homes on the farm as well. In 1972, Ron and Jackie bought out other family members and took over ownership of the 200 acre farm.

In 1975, their family began camping on the lower part of the farm on a regular basis; every Memorial Day, Fourth of July and Labor Day was spent there. The extended family and friends continue the tradition to this day.

In 2001 Ron and Jackie built their dream house on the farm. Ron selected the location of the home so they could see the Prekstole, a rock formation, (Norwegian for preacher’s pulpit) from the home.

Jackie’s dream was for the home to be very open with log construction and beams and a spacious kitchen. Henry Miller was contracted to build the home; he and his crew of Amish workmen built the home using many of the Amish barn construction techniques. The home has huge post and beam construction using notches and wooden pegs. Since the crew was Amish and didn’t drive vehicles, Ron picked them up each morning and returned them to their homes each evening. All of the wood and timbers used in the construction was harvested from the farm.

The two-story fireplace was made from stones from the original farmstead; even the cornerstone with the 1894 date was included. An additional 2001 was added to the fireplace upstairs to commemorate the new build.

After their parents passed away in 2009, Jessica and Elisa had rented the home to a caretaker; in October 2021 they began readying the home to become an Airbnb. They knew they were not planning on moving back to the area, but wanted to be able to visit the home occasionally and keep it in the family. Knowing that people loved being at the house, they decided sharing it with others as an Airbnb was the way to go.

To prepare the home for its new purpose, they finished some trim in the basement, renovated the basement bathroom, and completed a little light electrical and plumbing work.

Work is not a foreign concept for the duo. They both had their weddings at the valley. Jessica, complete with perfectly manicured nails, ended up shoveling cow pies from the aisle the morning of her wedding. Elisa was grouting floor tiles in the bar area the week of her wedding. Both women have a can-do attitude and are willing to tackle projects.

The biggest challenge for the women has been time. They both have families and jobs in the Twin Cities. Jessica and her husband have two children, Dylan, age 17, and Evan, age 13. Jessica has a PhD in biology and is a professor at Century College. Elisa also has two children, Sullivan, age 11, and Mae, age 12. Elisa is a partner at the law firm Jardine, Logan & O’Brien.

The BnB comes with a fully equipped kitchen complete with two fridges, a deep freeze and a microwave as well as pots, pans and dishes. Jessica has made sure to provide all the possibly forgotten essentials in carefully labeled containers in the pantry — no late night runs for essentials will be necessary for their guests!

While the home is equipped with Wi-Fi and internet, Elisa urges guests not to come for that. She sees the target guests as people from the city who want to escape the noise and busyness of the city and unwind. “It’s really quiet here; you can fly fish and swim in the creek, hike, and just look at the stars — it’s a different world than in the cities,” she explained.

While she was speaking a cardinal flew up to the patio window. Elisa quipped, “See, nature comes right to us here!”

Elisa feels that the Amish-built home is unique to the area; many people from the cities are not familiar with the Amish culture. The home is big enough for extended families to stay. The home is listed as 12-person occupancy, but there is room for additional people at an additional fee.

The gorgeous log home is furnished with antiques, many of which Ron had collected. The kitchen centerpiece is a operating wood stove which had been in the original farmhouse, moved to the Hatlevig home near Rushford, and later returned to a place of honor created specifically for it in the new house. A boat model created by an ancestor is displayed in the dining area. A bar, once used in a play at Peterson High School, now has a home in the basement.

There’s even an “old time push button landline” in the master bathroom, a feature that amazes young people — you can even make a call on it!

The home offers entertainment for that occasional rainy day — a large assortment of books, puzzles, games, and even a couple Barbie houses handmade by Ron for his girls are available.

The very first guests arrive April 1. At this time the place is 75–80% booked for the summer; a group from California will be making the home their headquarters as they attend a family reunion nearby, while others plan to use the home as a base camp as they bike and vacation in the area.

At this time, bookings are very open for the fall. The valley is full of gorgeous foliage in the fall, which will be a big draw for future guests. Hatlevig Valley will not be hosting events and parties due to the high insurance costs and extra work involved. They are, however, open to crafting groups and women’s weekends.

Jessica Rasmussen of Ready Maid, LLC will be taking care of the weekly housekeeping for the BnB. Jessica and Elisa have already hosted their extended family for Thanksgiving at the home, including their customary lefse making the day before. They have blocked out times for their families to enjoy the BnB themselves.

Jessica and Elisa stressed that everything they are doing is to honor their parents. A scholarship, the Jacqueline and Ronald Hatlevig Scholarship at WSU, is given to a person minoring or majoring in child advocacy in their honor. Jacqueline had helped implement the child advocacy program at WSU; the scholarship honoring his wife was Ronald’s idea originally.

It seems Jessica and Elisa have found the perfect way to honor their parents and share their dream home and their hearts with others as an AirBnB! They welcome you as their guests!