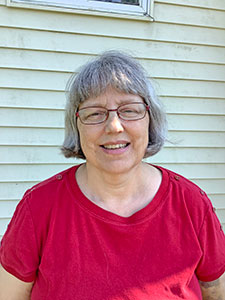 Your cell phone rings and you feel annoyed. “Car warranties… student loans… Medicare plans.” So many scams wasting your time. You hang up immediately, if you answer at all. But what if an unexpected phone call had the potential to save your life — how would you feel then?

That’s what Ann Junge Thacher has been dealing with for the last three years. Thacher, who lives in Bristol Center near Harmony, is on a Mayo Clinic waiting list for a kidney transplant. When a donor is found she will get a phone call. “At first I was nervous, thinking I might miss that call,” she says. “You have one hour to respond. But they have other contact numbers and now I know they’ll find me. It’s all a bit scary, but it’s exciting, too, knowing I might have the chance for a more normal life again.”

About eight years ago Thacher’s doctor discovered her kidneys were not functioning normally. Medicines brought some improvement. Dietary changes helped, too. But earlier this year more tests revealed further kidney deterioration. Her doctors determined that she had reached a crisis point and would need kidney dialysis to stay alive. On March 31, 2021, she had her first treatment, and she now travels three times each week to Decorah for the three-hour procedure.

Each person normally has two kidneys, both about the size of a closed fist, located below the rib cage on each side of spine. A healthy kidney removes minerals, fluids and waste from the bloodstream through the production of urine. People whose kidneys aren’t working adequately need that waste mechanically removed by dialysis. The other — but much more complicated — option is to receive a new kidney from a donor.

“I am hoping for a transplant,” says Thacher. “The Mayo Clinic is looking for a donor. Doctors check my blood and run other tests every quarter while I’m waiting. They say it can take up to five years before you hear anything. I need the right candidate to be found.”

Thacher is personally involved in that search. “One of my Mayo doctors suggested I run an ad in my local paper to let people know I’m waiting for a kidney donor,” she says, “so I did that recently in the Fillmore County Journal. You never know who might be out there who might see that. They might be the person who will offer to become a donor or who maybe they know someone willing to do that.”

In the meantime she’s coming to grips with her new routine of Decorah trips for dialysis treatments. “They haven’t been too bad for me so far,” she says, “and I do feel better after I have the dialysis. I’m getting to know the people at the Clinic and I take a book along to pass the time.”

Thacher grew up on a dairy farm but after getting married she moved to Michigan with her former husband Brad, who worked for General Motors. They had three children, two of whom still live locally. Twenty-seven years later, Thacher moved back to this area, where she now lives with her mom on her brother’s farm. “Family support is so important part of all this,” she says. She also works part-time at the Lanesboro Chamber of Commerce.

Who can be an organ donor? “There are a number of qualifications that get screened,” Thacher explains. “I don’t know how all of that works — I do know you have be under 70 and in good health. You can’t be a big drinker or use drugs, of course. Blood type is key. I’m O-Positive. That actually makes it a bit harder for me. Since more people have that blood type, more people are on that wait list. To be an organ donor is a wonderful thing for people to do and is a big sacrifice on their part. I keep hoping and praying that a kidney donor will be found.”

Approximately 5,000 people in the U.S. receive kidney donations each year. Ann remains on the list, waiting for that phone call from Mayo, and waiting to be one of them. Is she optimistic? “I have to be!” she says. “Thinking about having a healthier life again, having the freedom to do normal things, and not be so dependent on the dialysis machine, that keeps me going.”

Anyone interested in being a kidney donor or seeking more information can contact the Mayo Clinic by calling 1 (866) 227-1569 (toll free) or by visiting their website at mayoclinic.org/livingdonor.