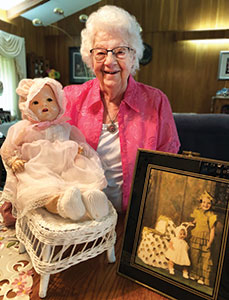 Gloria Bergey of Harmony has many precious items she has collected through her life. Among her most cherished possessions is a doll she won in 1936 at Preston’s Fourth of July celebration.

Just four years old at the time, the young daughter of Obert and Leona Garness, Gloria won the doll during the children’s parade of doll buggies, tricycles and pets.

Gloria admits that she doesn’t remember a lot about the day, but has heard the story so many times it has become a beloved part of her history.

As the Fourth of July approached, Gloria explained that her mother and aunt lovingly sculpted white and yellow crepe paper into ruffles and flowers to adorn her doll buggy. Then, they crafted a matching outfit and headpiece for Gloria to wear as she pushed her buggy through the parade.

Her doll at the time was a small, plain rubber doll, that rode in the buggy. When she was announced the winner, and others saw her rubber doll, Gloria said many commented that she needed the new doll.

With the prize, the family also won a portrait of Gloria with her buggy and new doll, taken by Lanesboro photographer Mathias Bue. While the family did purchase a few small prints of the photograph, Gloria said the family could not afford the framed portrait displayed in the window of Bue’s photography studio. One day, however, the local banker showed up at the Garness farm with the portrait, and gifted it to Gloria.

Newspaper clippings from the Preston Times on July 9, 1936, explain that Preston hosted 15,000 for the “best celebration of all time.”

The description of the parade stated, “The big time opened at 10:30 with the parade, sponsored by the Women’s Club, which was all of five blocks long and drew great praise from every quarter. Winning first prize for the most artistic float was Austin’s Food Store, while the Mabel Fire Department, with an old wreck which threw everyone into gales of laughter, took first place for the most humorous float. Miss Gloria Garness was declared winner of the doll buggy division, with Robert Berry taking first honors in the pet division and Curtis Michener, first honors in the tricycle division.” The newspaper article also stated that the parade consisted of nearly 100 entries. 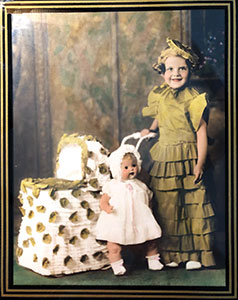 The new doll was well loved through the years as Gloria said it became the only doll she ever played with. The doll has moveable eyes, used to cry and has small teeth peeking out of a small, rosebud mouth.

Gloria has never thought about how much the doll was worth at the time, or even now; it just means a lot to have something that reminds her of her childhood and a special moment on a long-ago Fourth of July.

The doll is so special to Gloria and has continued to be a cherished item. It has moved with her as she married and became a mother and housewife, living on several farms in Fillmore County. It also moved with Gloria into Harmony where she and her husband Gerald now make their home.

The doll is displayed in a guest bedroom, on a wicker chair, in the home. She now wears a white dress and bonnet with knitted booties, created by a local seamstress when her original clothes became fragile and tattered. Gloria said she kept the doll’s original clothing, now safely tucked away.

“If it’s good, I can’t throw it out,” Gloria explained about her collection of special things. “I’ve got a lot of funny things I’ve saved.”

Fourth of July celebrations were always part of the Garness summers while Gloria was growing up and after she was married with her own family.

“My parents really liked a good parade,” she added.

Fourth of July also meant family reunions and gatherings with neighbors, parades and fireworks, and good food and fun. While memories are shared about past Fourth of July celebrations, Gloria holds the doll she brought home 84 years ago, and smiles with love.