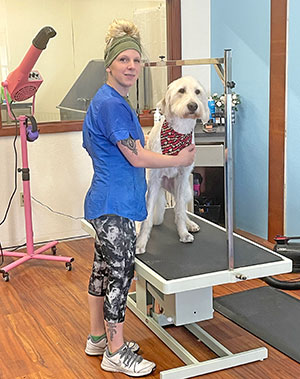 Who doesn’t love being pampered with a relaxing shampoo, haircut and blowout? After a little “buff and shine,” one can leave the salon feeling like a whole new person! It’s no different for our canine and feline loved ones and they can get a “custom cut, from nose to butt,” at Birch Bark Grooming in Harmony.

Emily Ragan, a groomer for 14 years, opened her pet salon in July and has been busy beautifying local cats and dogs as well as past clients who have followed her to Harmony.

Ragan explained she began her grooming career in 2007, when she started working at PetSmart as a bather. She stated she had always been obsessed with animals and had wanted a job where she could work with them on a daily basis.

Soon after working as a bather, PetSmart sent her to grooming school and she became a certified groomer.

From there, Ragan said she spent several years as a groomer in Wisconsin where she also helped manage the salon. When she moved to Minnesota in 2015, she said she began setting goals to open her own shop.

When her husband Todd accepted a job as a Fillmore County Deputy, he commuted from their home in Rochester until the family could find a home locally. In 2019, the family of six moved to Harmony with their Collie, Sig, and their rag doll cat, Bane. The couple has four children, ranging in age from one to 11.

Ragan began grooming animals out of her home when she first came to Harmony, but knew she wanted to open a storefront, feeling it would make clients feel more comfortable as well as provide more room for grooming larger animals.

Her current location, on Main Street, provides the much needed space for her grooming equipment, but also offers room to expand her business when she is ready to add a retail element to the store. She notes that grooming supplies, toys and treats may be products she begins to offer when she’s ready to take that next step.

Also, as her business grows, Ragan said she would be open to bringing in an additional groomer. As a matter of fact, she loves being a mentor to other groomers and is open to grooming discussions that can make her a better groomer as well. “If something works well, it’s only going to benefit the animal,” she added.

In most areas, there are a shortage of groomers and if she can work with others, even those who work from their homes, the networking and referrals can be helpful to all parties.

One of the most satisfying aspects of her work is experiencing the “Oh, wow” moment that happens when a pet owner returns to pick up their dog or cat. “I like using my creativity and then seeing how it makes a difference in how a pet looks and feels,” Ragan said.

Even though she has been grooming dogs and cats for 14 years, Ragan said it has never felt like going to work. She enjoys the relationships she forms with the animals as well as their owners and looks forward to seeing her clients on return visits to get another round of pampering.

When asked if she had groomed any unique animals, Ragan said she groomed a Black Russian Terrier at one time. The dogs are a very large terrier with a very specific hair cut. Their coat is thick with a soft undercoat covered by a courser, protective outer coat, which can easily become matted.

Her client list varies from small dogs and more stately animals to the aloof feline. She utilizes a contract between pet owner and herself as a groomer to determine exactly what the animal needs and what the owner would like.

“This opens a discussion about the animal’s medical condition as well as any behavioral issues they might have,” Ragan said. “I don’t want the owners to hide anything from me.”

Rather than refusing to groom difficult animals, Ragan said she would prefer to work with the owners and the animals to get them what they want and need.

She schedules grooming appointments, one-on-one, so she has time to work with anxious dogs to help rehabilitate them to grooming protocols and procedures.

Ragan accepts appointments at Birch Bark Grooming on Tuesdays, Wednesdays and Thursdays. To make an appointment, one can call (507) 886-2275 or pop into her shop on Harmony’s Main Street.

Ragan is currently running an “Unleash the Quacken” shop local promotion where she has hidden 10 rubber ducks around town, at other small businesses in Harmony. Each duck has a special offer for her business noted on the underside of the duck. Once someone finds the duck, they are asked to take a photo of it, post it to social media and tag Birch Bark Grooming. Or they can just share it to the Birch Bark Grooming Facebook page with the hashtag #supportlocal or #HarmonyMn. Once the lucky individual has done that, he or she can bring the duck back to Birch Bark Grooming to claim the prize in the form of a certificate that can be used at any future time.

Future plans include sharing some fall-themed treats during Taste of the Trail events in Harmony on Saturday, September 18.

When she’s not at her pet salon, Ragan enjoys running and spending time with her family. She enjoys bow hunting and time spent outside. She also stated she and her children like to go for a lot of walks and she loves when it’s a nice day so she can walk the short distance from her home to her salon.