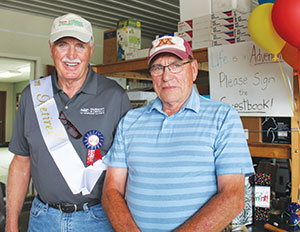 “If you like what you do, you never have to work a day in your life and that’s true,” Dr. Lynn Aggen said. Aggen spent 47 years working at the Harmony Veterinary Clinic and celebrated his retirement with an open house on June 18.

It all started when a steer needed medical attention at his parents’ farm near Worthington, Minn. Aggen was able to watch the vet work on the steer. “I was about 10 at the time and that piqued my interest,” he said. When he started college at what was then known as Worthington College, now called Minnesota West Technical and Community College, he made sure to take pre-vet classes. After receiving a two-year degree, Aggen applied for veterinarian school and was one of the few to be accepted out of hundreds of applicants.

When Aggen was still in school to become a vet, he took a trip to the Harmony Veterinary Clinic with a classmate to look into a breeding problem with a dairy herd. At the time, Dr. Andy Overby and Dr. Bob Peters, who had started the practice in 1958, were looking to hire another vet to join them. Aggen kept in touch and, a year later when he graduated, he headed straight for Harmony. “It just seemed like this was a great place to be and it evidently was,” he said. The hills of Southeastern Minnesota were different than the flat land Aggen was used to, but he quickly fell in love with the area and he’s been here ever since.

During the time that Aggen was with the Harmony Veterinary Clinic, he primarily worked with and treated large animals such as horses, cattle, sheep, goats, and more, although he also took care of small animals when he was on call. “To be able to diagnose something or fix something is very satisfying,” he said. He especially enjoyed obstetrical care. “It’s pretty hard to beat delivering live calves, pigs, sheep, foals,” he said. “I don’t know of anything much more satisfying. I didn’t ever get tired of it.” 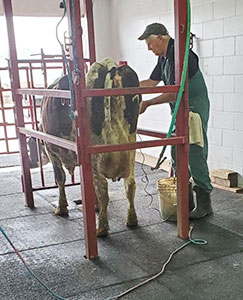 In his 47 years as a vet, Aggen has seen a lot of changes in agriculture which has translated to changes in the veterinarian industry as well. There are fewer farms, but about the same number of animals as farms consolidate and grow. A lot of time used to be spent vaccinating against pig cholera, which has now been eliminated. He has also seen an increase in the number of horses he treats as more people have been taking up riding. However, the care he provides for animals has remained consistent. “The more things change, the more they stay the same,” he commented. Client relationships are still important as well. “It doesn’t mater how good of a veterinarian you are, you have to relate to your client,” he explained. “We’re a service business and you have to take care of your people.”

Aggen has worked with some of the same farmers for his entire career. “They become like family,” he said. “You watch their kids grow up, play sports, get married.” Many of those people attended his retirement open house on June 18, which brought back a lot of memories. “It was very, very humbling,” Aggen said.

Aggen’s last day of work was June 30. When asked what his plans are for retirement, he laughed. “Barb has quite a list,” he said about his wife of nearly 50 years. Before cell phones, she and their children spent a lot of time answering the phone and helping out when Aggen was on call. “Being a vet was a family business. It would never have worked without everyone’s cooperation and participation,” he explained.

Aggen also gives a lot of credit to his co-workers. “I’ve been blessed with excellent partners, associates, and support staff,” he said. “It wasn’t a one-man show.” Retirement won’t keep him away from the clinic. He plans to stop in now and then to see how things are going, but he’s not worried that his absence as a vet will be a problem. “We have a really super staff, both tech help and veterinarians, he said. “It’s in good hands.”