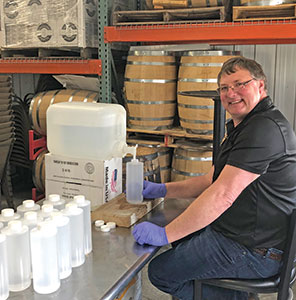 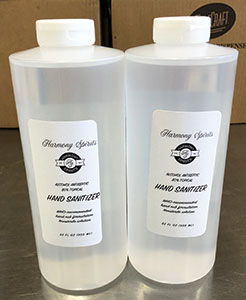 As the world continues to struggle with the coronavirus pandemic, individuals and businesses are stepping in to help. This week, Harmony Spirits has stepped in to help meet the needs of its community and greater southeastern Minnesota by producing and distributing hand sanitizer.

Harmony Spirits’ owners, Jim Simpson, Andy Craig and Larry Tammel have been partnering with several area businesses to acquire supplies needed to produce hand sanitizers that will be sold at local businesses as well as on site at their location.

The sanitizer produced will be made using the recipe provided by the World Health Organization.

Simpson said the idea first came to them as the three were sitting in their tasting room — each in his own corner as they practiced social distancing. The business had received an email from the Tobacco Tax and Trade Bureau that noted it and the Federal Drug Administration were lifting restrictions so distilleries could make hand sanitizer and included a recommended sanitizer recipe from the World Health Organization.

As the trio discussed the possibility, Simpson said, “We saw a need for both individuals and businesses in our community that we could help with and decided to pursue it.”

Simpson also stated that because their tasting room had been closed as part of the governor’s executive order issued on March 16, the three owners were “kind of sitting around, twiddling our thumbs.”

“We were really glad to have something to think about and do,” he added.

In the course of their discussions, the three men quickly determined that producing the alcohol at their facility would be too expensive, which in turn, would result in a very expensive hand sanitizer.

“It would have been astronomically expensive for us to produce our own alcohol,” Simpson reiterated. “We are a small-batch, local-grain distillery. We wanted to help people out, but not charge an arm and a leg.”

Simpson, Craig and Tammel began reaching out to former co-workers, colleagues and other vendors who produce and sell certain alcohols. Finally, Simpson found a company that would sell them a 200-proof alcohol, but they had to buy a whole truck load.

Because the Harmony distillery does not have the storage capacity for that amount of alcohol, Simpson contacted three other distilleries in the region to split the order, including RockFilter Distillery in Spring Grove and distilleries in Adams and Chippewa Falls, Wis.

“We’re just really blending the product,” Simpson explained. “We have the right equipment, the right tanks. The fact that we’re a food grade facility works well to make a FDA-regulated product.”

The World Health Organization’s recipe for the hand sanitizer is 80% alcohol, but also contains glycerin, hydrogen peroxide and purified water.

Production of the first batch of sanitizer took place last week with several local businesses bringing in their own containers to fill.

Several regional businesses claimed much of the initial batches, including Jimmy’s Salad Dressing company in Stewartville, which brought down dressing bottles to fill with the product. McDonald’s in Onalaska has requested three drums and the emergency service managers of Fillmore County have requested some be reserved for nursing homes and schools.

“We are trying, as quickly as we can, to get it made and containerized in some shape or form,” Simpson said. “This is not something we do every day.”

Finding containers to hold the sanitizer once it is produced is another challenge facing the crew at Harmony Spirits.

“Getting containers has been difficult,” Simpson said. “Many plastic bottles are produced in China and shipping and delivery from there has basically shut down.”

Simpson anticipates more of the sanitizer will be available this week for local sale, beginning April 6. A shipment of 10,868 bottles is expected to arrive at the beginning of the week and filling those bottles will be this week’s work.

In addition to being sold on site at Harmony Spirits, plans are to sell the hand sanitizer at local grocery stores and liquor stores, with more sites being added in the coming weeks.

“This sanitizer is local and local people need it and that’s where we hope to go,” Simpson said. “We won’t need to focus on wider distributions.”

While the distillery is now committed to helping the community meet this specific need, Simpson is unsure if it will be a long-term project.

“We’ll determine the need once this initial batch is completed,” he said. “A lot of the ethanol plants will likely be pitching in to make sanitizer too, but as long as there is a need and there is stuff available, we’re willing to pitch in.”

Harmony Spirits opened its doors the spring of 2019 with a grand opening following in July. The distillery has a tasting room where customers can buy 375-milliliter bottles of rum, whiskey, vodka, bourbon whiskey and gin. Bourbon barrel rum and gin are still in development.

While the governor’s order for restaurants and bars to be closed is still in effect, Harmony Spirits is operating on a “by appointment” basis. “If we are on site, we’ll be more than happy to sell you a bottle,” Simpson said.

Individuals who are interested in purchasing the hand sanitizer should watch the distillery’s website, harmonyspirits.net, or follow Harmony Spirits on Facebook for more specific dates and locations where the product will be available for sale. Inquiries can also be directed to contact@harmonyspirits.net.