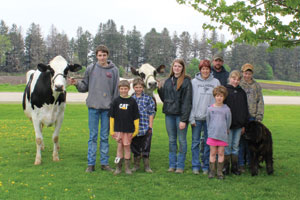 Jim and Randi Wingert of Harmony know what it is to work hard, but they also know how fulfilling that work can be for their whole family.  “It’s honorable, rewarding, yet the most challenging work some days,” Randi said.  Jim and Randi along with their seven children,  Coltin (19), Morgan (17), Claytin (12), Mady (11), Melony (8), Maggie (8), and Martina (7) run a dairy farm just outside of Harmony.  The family milks a herd of about 90 head, consisting of registered Ayrshires, Brown Swiss, and crossbreds.  “We don’t have any hired help.  It’s just us and the kids,” Randi said.  In addition to the cows, the Wingerts also raise chickens and ducks for their eggs, which  are sold to Estelle’s in Harmony.  They usually raise a few feeder  pigs as well each year for their family.

As if raising seven children and running a dairy farm wasn’t enough, in the past two years, Jim and Randi have each added a full-time job to their already full plates, a change made necessary by the low milk prices that have plagued dairy farmers over the last three to four  years.  Jim drives feed truck for a company in Leroy, and Randi works at Harmony Kids.  Their day starts at 4 a.m. when the two of them head out to the barn to do the morning chores.  After chores, Randi leaves for work, followed a little while later by Jim.  Jim often doesn’t return home from his job until after 10 p.m. so when Randi arrives home in the afternoon, she and the kids work together to get the evening chores done.  If for some reason, she’s running late, the kids pitch right in and get things done.  “We have the best hired help,” she said, smiling.  “If somebody’s gone, everyone knows where to fill in.”  Their kids are just as devoted to the farm as Jim and Randi are and enjoy taking care of the cows.  “Their hard work and dedication to their animals is amazing,” Randi said.

The full-time jobs aren’t the only thing that has changed on the Wingert dairy farm since milk prices started dropping.  “Farm-wise, we do everything ourselves,” Randi explained.  The family does their own repairs on their equipment now, ordering parts and supplies online and watching YouTube videos to figure out how to do new things.  They’ve also cut back on their household expenses, saving money wherever they can.  “We’ve sacrificed a lot,” Randi said. “The cows eat first.  End of story.  Whatever’s left over, that’s what we get to try to live off of.”

When they first noticed that things were getting a little tighter, Jim and Randi tried to combat it by adding a third milking to their daily schedule, in addition to the morning and evening ones they already did  everyday.  They were able to stick to that for 16 months, but when they realized that their cows weren’t handling the strenuous schedule very well anymore, they knew they had to go back to just two daily  milkings.  “We had times it worked well for us, but it was starting to wear on everything,” Randi said, explaining that even their equipment was showing signs of wearing down from the extra milking.  In addition to that, their oldest son, Coltin, was heading off to college at the  University of Wiconsin-River Falls to study dairy management, and it just wasn’t feasible to keep milking three times a day without his help.  Shortly after that, Randi began her full-time job off the farm, followed by Jim a month later.

For Jim and Randi, the future of their dairy farm is uncertain.  “We hope there’s a future, but we just don’t know,” Randi said.  For now, the couple takes it day by day and sometimes hour by hour, as they watch one after another of their fellow dairy farmers close their milking parlors for good.  “For now we just keep trudging forward,”  she said.  “We can’t afford to stay and we can’t afford to get out,” Jim added.  “We are literally paying to work right now and that’s every dairy farm.”  Randi pointed out that each time a dairy farm shuts down, it doesn’t just affect that farmer, but also hurts the local economy.  “During the week, we do farm business with 10-15  businesses,” she explained.  “They’re all affected.”

Despite the hardship and the uncertainty, Jim and Randi are grateful for their farm and everything it’s given their family.  “I got to stay home and raise the kids, and I am so thankful for that,” Randi said.  The kids are involved in 4-H and FFA, both of which have provided them  with many opportunities and lifelong skills.  Morgan is currently serving as a MN State Brown Swiss Ambassador, which allows her to share her love of dairy farming.  The whole family has also forged lifelong  friendships with others in the dairy business.  “The people we have met in this industry make it great.  We cherish each and every one of them,” Randi said.  “Dairy farming teaches hard work, respect, give and take.  Seeing a new calf born or how excited the kids get never gets old even though we’ve all seen it a million times.”