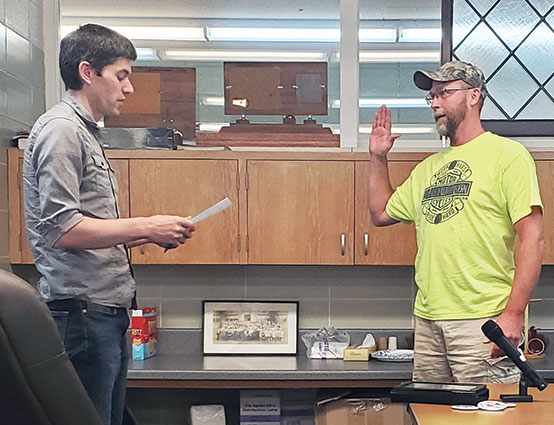 A resolution accepting the resignation of council member Tony Webber was adopted at the June 14 Harmony Council meeting. A notification had previously been put out asking any Harmony residents interested in filling his seat to send a letter of interest to the city and several letters were received. “I want to thank everybody who applied,” Mayor Steve Donney said, noting that it is a short-term seat that only needs to be filled until the elections in November. Donney encouraged all who were interested to run for election at that time as well. Council member Steve Sagen made a motion to appoint Deb Swenson as she has previous experience on the council. The motion failed for lack of a second. Donney then made a motion to appoint Kyle Scheevel to the seat and the motion passed. Scheevel was sworn in by City Attorney Greg Schieber and joined the council for the rest of the meeting.

Craig Britton from Widseth presented the council with a proposal for the city’s comprehensive plan. He noted that the last time the plan was updated was in 1998 so it is due for another one. If the city hires Widseth, the company would then gather input from a comprehensive planning committee, the city council, and the community of Harmony. The total process would take about 12 months with meetings taking place every few months. The proposed comprehensive plan would be brought to the council for final approval. Britton estimated that the total cost for the plan would come to approximately $29,000. “The price seems high, but compared to other groups, it’s actually cheaper,” City Administrator Devin Swanberg noted, adding that Widseth is highly recommended. “I do not question the quality of work from Widseth.” The council approved a motion to hire Widseth to update the city’s comprehensive plan.

The consent agenda was approved and included the minutes of the regular and special May meetings, the claims and May checks, and the donation of land along the bike trail.

Liquor license requests from The Bite, On the Crunchy Side, Pam’s Corner Convenience, and Harmony Golf Course were reviewed and approved with the exception of one business that has an outstanding utility bill. Their request was approved pending payment of the bill.

Two pay requests were received from Generation X. One was in the amount of $39,325.25 for the utility and drainage pipe installation at the Splash Pad. The other pay request was for $13,957.40 for the Dairyland project. Both requests were approved.

The time for the citywide clean-up was changed and will now take place from 10 a.m. – 2 p.m. on Sunday, June 19. Swanberg noted that the city offices had received several calls from elderly residents who have items to get rid of, but won’t be able to get it to the community center on Sunday. He asked if anyone knew of any groups in town that would be willing to help them out. Scheevel offered to run it by the Conservation Club to see if there was any interest.

The council reviewed a resolution drafted by Schieber that would establish a commercial truck route on Wickett Drive NW beginning at the Morem Drive intersection. The council adopted the resolution, changing it to all of Wickett Drive.

A proposal from Short Elliott Hendrickson Inc. for a UV system for the wastewater treatment plant was reviewed. The council accepted the proposal and will use some of the American Rescue Funds to cover some of the costs of the project.

The EDA board recommended that the council approve a $25,000 loan request from Nicole Johnson to purchase the building at 15 Center St E.

A new circulation desk is being built for the Harmony Library. The fireworks for the Fourth of July celebration have been received. The whole show will be done electronically this year and the equipment for that has been ordered. The electric car charging stations have been installed and are ready for use.

Letters were sent out to residents whose lawns are over the limit of eight inches. Each one has two weeks to mow their lawn or the city will do it for a charge of $250. Mayor Donney recommended that the council consider shortening that time frame as two weeks of growth on top of eight inches is quite a bit.

The next Harmony City Council meeting will be held on July 12 at 7 p.m.