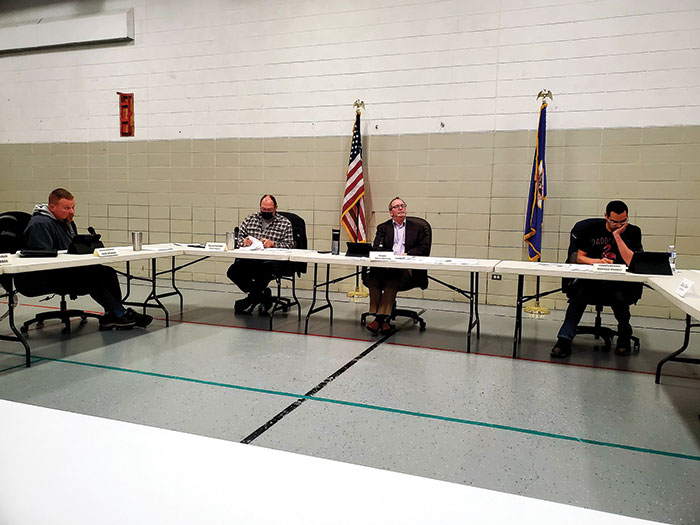 The March 8 Harmony City Council meeting took place in the community center gymnasium due to the large number of residents present. Council member Tony Webber was absent. The meeting opened with a public hearing on the proposed Industrial Park Plat. Jerome Illg spoke regarding the special meeting that took place on March 1. At that meeting, some people questioned how often the zoning ordinances are reviewed and updated. Illg noted that they undergo review and modification as necessary and were created with much time and effort from the council members. To change one involves many meetings and public input so the residents can always be aware of the process. EDA Coordinator Chris Giesen addressed the council and noted that Planning and Zoning approved the plat. The council passed a motion approving the plat as well and the public hearing was closed.

The consent agenda was approved and included the minutes of the regular February 8 meeting and the March 1 special meeting, the claims and February checks, cash balances, and a liquor license approval for Kwik Trip.

The council reviewed several amended zoning ordinance drafts regarding retail/variety stores. Currently, permits for new buildings are reviewed by City Administrator Devin Swanberg and then approved if he sees no issues, or sent to Planning and Zoning for more review. The proposed amended conditional use ordinance would add another step for builders who qualify for it under the terms of the ordinance. City Attorney Greg Schieber clarified that the ordinance would not necessarily prevent retail stores from building in Harmony as long as they met all the requirements and Planning and Zoning approved the permit. The EDA recommended that the council approve amended ordinance 22.07 with restrictions on retail stores. “All in all, our duty is actually to the people and in doing that, I think we should pass this ordinance,” Council member Steve Sagen commented. Mayor Steve Donney noted that the biggest concern he heard from the public was that having a dollar store in Harmony would put the grocery store out of business. “We keep our businesses in town by shopping there, not by keeping competitors out,” he said. “Let’s make Harmony a better place. Let’s shop in town at the businesses we want to survive.” Sagen made a motion to approve amended ordinance 22.07 with Domingo Kingsley seconding. The motion failed with Jesse Grabau voting against and Donney abstaining. Sagen then made a motion to approve draft two of the amended conditional use permit. The motion passed with Grabau voting no.

Schieber noted that the emergency moratorium placed on retail store applicants for zoning permits would end on March 10 and the amended ordinance would not go into effect until it had been published in the paper, which could take anywhere from 6-13 days. He recommended extending the moratorium to March 21 to ensure that it would stay in effect until the ordinance was officially changed. The council approved the extended moratorium. Schieber will write up a summary of the ordinance change to be published in the Fillmore County Journal.

A resolution establishing precincts and polling place was approved.

The Wastewater Treatment Plant currently uses a chlorine system, but the state is encouraging cities to switch to a UV system instead. Swanberg is looking into the cost for that and will keep the council updated.

The internet grant is moving along. Once the environmental portion of the grant has been completed, a bid request can be sent out.

The city’s Building and Maintenance department is in need of a new drag-behind mower, which is used to cut the grass around the wastewater treatment plant and in the industrial park. The current one is around 20 years old and is broken again after being repaired three times last summer. The equipment supplier they normally use doesn’t have one available until December 2022, which is too late as it is needed this summer. However, Preston Equipment can supply one by May. The EDA has offered to pay half of the cost and the other half would come from the equipment fund. The purchase was approved.

Swanberg asked the council if they would like to continue to replace the old light poles along Main Street. He noted that each time a new one is installed, if the old one is in acceptable condition, it is kept in case another light pole is hit by a vehicle and needs to be replaced immediately. A motion to purchase 13 new light poles was approved.

The EDA has been working with KTNS Trucking on their purchase of a lot in the industrial park. The company plans to construct its headquarters as well as a large storage unit for rent there. The EDA recommended that the council approve the loan, development agreement, a budget modification to TIF 1-8, and an extension for the closing date until May 1, 2022. The council approved all four of the items.

A low bid from Weiser Brothers for building the picnic shelter and bathrooms near the splash pad was approved on the recommendation of the Park Board. The water fountain that is to be installed there should be covered by a State Health Improvement Partnership grant. A payment of $20,000 for the remainder of the splash pad equipment was approved.

The new dropboxes have been delivered to the Harmony Public Library and will be installed in the next week or so.

The new garbage and recycling bins from Richard’s Sanitation have been delivered to the community center and will be distributed soon. The last pickup using the current bag system will take place on March 26, and April 6 will be the starting date for the new one. More information will be on the city website along with a calendar for pickup days.

The next Harmony City Council meeting will be held on April 12 at 7 p.m.