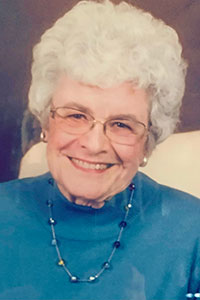 Funeral Mass for Hallie will be held on Thursday, March 4, 2021, at St. Columban Catholic Church in Preston, Minn.  A Rosary will be held at 9:30 a.m.  Public visitation will be from 10-11 a.m., with the funeral Mass beginning at 11 a.m. Burial will take place at Calvary Cemetery in Canton, Minn. Masks are required and social distancing will be practiced.

Hallie was born on September 21, 1932 in Crawfordsville, Ind., to James and Kathryne (McMahon) Kirkpatrick.  Hallie graduated from Holy Family Academy, Beaverville, Ill., and then attended St. Mary’s College in South Bend, Ind., where she earned her Bachelor’s Degree in Fine Arts.

Following college, Hallie married Clement Snyder, Jr. and they lived in Virginia, California, and Canton, Minn. following Clem’s discharge from the Marine Corps. They then settled in Preston, Minn., where Clem started Snyder Law Office and they moved to the farm and raised eight kids. Divorced in 1982, Hallie moved into town where she resided for the following 35 years. She enjoyed a career at the Fillmore County Journal as editor and salesperson, until she retired.

In addition to a busy family life, Hallie enjoyed gardening, sewing, crafts, and was an avid reader. On most weekdays she made time to meet her friends for coffee and conversation. Hallie was an involved member of St. Columban Catholic Church, where she served on the parish council and was a lay minister. Hallie celebrated her Scottish-Irish heritage by visiting Scotland and Ireland, and enjoyed the annual St. Patrick’s Day festival.

She had a strong passion for civic involvement, and was an active volunteer in Trout Days, the Sesquicentennial Committee, the Preston Arts Council, and particularly fond of the Preston Mural Project.

Hallie is also survived by her sisters Colleen (Michael) Finnerty, Beth (Robert) Panzer and many nieces and nephews.