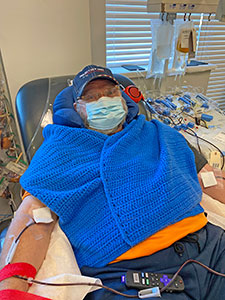 Did you know that if you have had COVID and have been symptom free for at least fourteen days, you can donate plasma to help others with COVID? Rushford native Larry Bartelson shared his personal experience with COVID and convalescent plasma donation.

Larry first felt the symptoms of COVID-19 October 30, 2020, and went to be tested for it. After isolating for several days, he was notified on Monday, November 2, 2020, that he was indeed positive for COVID. For the next nine days or so, Larry had most of the COVID symptoms in varying degrees; he was totally exhausted. Larry did not need to be hospitalized, however. The after-effect that most bothers him now is memory fog.

Once he was recovered, he happened to meet up with Lynn Humble, Rushford Ambulance Director. As they were chatting, she asked Larry if he had considered donating plasma and encouraged him to check it out.

Larry called the Red Cross (1-800-Red Cross) in Fort Wayne, Ind.; they connected him with the La Crosse, Wis., Red Cross. He made an appointment in mid-December for his first donation. Larry enthused about the kindness with which he was treated by all the Red Cross staff.

Larry traveled to the Red Cross building which is located about two miles past Valley View Mall; he could have chosen to go to Rochester as well. The first time Larry went to donate, it took around two hours for screening, registration, etc. His subsequent donations took about 45-50 minutes each.

Plasma is donated using an apheresis process. This means blood is drawn from one arm and sent through a high tech machine that collects the plasma and then returns the red cells, platelets, and some saline back through another needle in your other arm.

Donors can donate as often as every seven days for up to three months. This would allow a maximum of eight times. After eight donations or three months (whichever comes first), the donor is deferred from any donations for the next six months.

At this point, Larry has donated three times. After his first donation, he encouraged his fellow Lion, Tony Becker, to accompany him and donate as well. Tony’s mom, Jackie, a nurse, also encouraged Tony to do it. Tony considers this a competition now and vows to beat Larry in donations.

“As long as I’m still positive, I plan on donating weekly or bi-weekly. It’s mostly painless and the people at the Red Cross pamper us! Anybody willing and able to do so should do it; we need to help other people,” Tony declared.

Bartelson shared that the nurses at Red Cross had said each of his donations can help up to three COVID patients and two cancer patients. According to the Red Cross website, the number of people each donor can help varies with the donor’s height and weight.

Sue Thesenga, regional  communications manager for Red Cross in Minneapolis, said the Red Cross began collecting convalescent plasma in April 2020. Since this was previously unknown, a lot of public education needed to be done.

In 2020 the Red Cross distributed over 125,000 convalescent products to hospitalized COVID patients; tens of thousands of people have recovered thanks to the plasma. With the rapid rise in the number of cases, there is now a shortage of plasma. There has been a 250% increase in the use of convalescent plasma since October.

Thesenga noted there are two ways to help. People can donate plasma or they can donate whole blood. Currently the Red Cross is testing all blood donations for COVID antibodies. If the donors are positive, they are contacted and given the opportunity to become a convalescent plasma donor.

Larry Bartelson shared that he has signed up for the Red Cross blood donor app on his phone. On the app, there are many different groups of people who donate. He noted that there are currently 82 Lion members who are donating. The Lions rank 81st in donations in the U.S. The Vikings, Knights of Columbus, and Boy Scouts are a few of the groups he mentioned. Thesenga said there are hundreds of different organizations and businesses on the app. The app tracks your donations and notifies you when you are eligible to donate again.

Bartelson said his reason for donating is that he likes to give back to the community; he’s civic-minded and enjoys being part of an organization. He personally knows several people in Rushford who have benefited from convalescent plasma when they were hospitalized for COVID.

The first time Larry gave plasma, he took along a prayer shawl that members of his church had given him when he had had his rotator cup surgery done previously. The nurses admired the shawl; when he returned for his next donation, he brought along six prayer shawls that the Rushford Lutheran ladies had donated to the cause.

Bartelson encourages everyone to join him in giving convalescent plasma. You just need to call 1-800-Red Cross and they will help you set up an appointment. If you would feel better going with someone, he’s willing to have you go with him.

Larry’s final thought, “I don’t like COVID — we’re making lemonade out of lemons!”