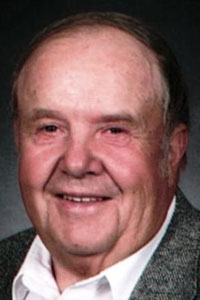 At 9:20 p.m. on Sunday, August 22, 2021, Gust Fred Lex left this world for his heavenly home and to meet our Savior, Jesus Christ. Gust died a peaceful death in hospice care at the Mayo Clinic – Methodist Hospital. Gust had aspiration pneumonia and initially was in St. Marys Hospital starting July 4, 2021.

Gust was born September 14, 1939, the first born son of Harry and Frances (Bornfleth) Lex and the oldest of seven children. Gust lost his dear mother when he was nine years old as well as his younger six siblings left without a loving mother. Uncle George and Aunt Loretta Tart raised the children but Gust worked out as a hired farm hand in his teen years. He was hired at Crenlo, Inc., Rochester, Minn., in his late teens and trained as a welder and even a semi truck driver. Gust met the love of his life, Margaret Lange who lived across the street from his apartment building in 1960. They were married September 29, 1961, by Rev. Harlyn Hagmann at the new (Christ) United Methodist Church, Rochester. Their first born son was born one year later on September 16, 1962 and looked like a miniature Gust with curly hair and beautiful baby face. Then they were blessed with a second son on February 1, 1969, Peter James Lex, and Peter favored his mother’s features. Peter and his wife Jerilyn (Sheets) brought more happiness to Gust and Margaret with treasured grandchildren Melanie Marie, and twins Jason James and Sean Gust Lex. Peter is well known in the area for his awesome artistic spray painting accomplishments, including the huge bookmobile garage door with multiple shelves of “books,” at the back of the Rochester Public Library. Gust was very proud of Peter’s artistic workmanship.

Gust enjoyed fishing and hunting immensely. He loved fishing for halibut outside of Homer, Alaska, and was proud to hook an 85-lb halibut. Many delicious halibut meals were enjoyed back home in Minnesota. Gust and Margaret enjoyed traveling, especially to Hawaii and Europe. When their sons were young and they lived in Stewartville, they took many camping trips with their pop-up camper, traveling to Washington, D.C. in 1975, the year before our country’s bicentennial. Woodworking was a favorite hobby for Gust and he made many custom curios, and was proud of the walnut kitchen cupboards he made from home-sawed walnut wood. Also, beautiful fish pole handles from various woods were made by Gust.

Gust was a longtime member of the Stewartville United Methodist Church and was on the Building Committee for the new church in 1992. He headed up the volunteer painting crew and instructed them to paint “smooth.” He and son Peter were in charge of spraying the finish on the very high worship and fellowship hall ceilings. Gust worked many years for Mohn Realty as a maintenance “engineer” beginning in the late 1960s.

Gust was such an honorable person. He was a devoted and loving, thoughtful husband, always remembering special occasions with beautiful greeting cards for his wife. He valued his friends and family. It was unfortunate indeed that Gust suffered a major stroke in 2012 with apraxia, a form of aphasia, being a big deficit for him when he visited with others. He knew what he wanted to say, but could not express the words. He would then say, “Just forget it.” Gust and Margaret would have celebrated their 60th (diamond) wedding anniversary on September 29, 2021. They repeated their wedding vows on their 25th and 50th wedding anniversaries. “Through sickness and health,” they had each other.

Gust is survived by his wife Margaret of rural Stewartville, children Fred Gust Lex of Plymouth, Minn., Peter and Jerilyn (Sheets) Lex of rural Grand Meadow, Minn., and three grandchildren: Melanie Marie Lex of Minneapolis, Minn., and twins Jason James and Sean Gust Lex of Rochester, Minn.; and four siblings: Harriet (Gerald) Truman of LeRoy, Minn., Carole (Roger) Reicks of Chester, Iowa, Laura (Charles) Frank of Spring Valley, Minn., and Shearam Lex of Spring Valley, Minn.. He was preceded in death by his grandparents and his aunt and uncle, Loretta and George Tart. He was also preceded in death by his parents, a sister Elner Eggerich, and brother Loren Lex.