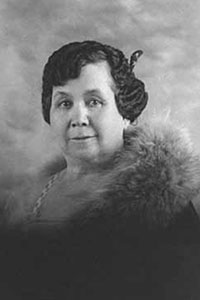 One hundred years ago, on August 26, 1920, the 19th Amendment went into effect. The MNHS (Minnesota Historical Society) will host an online exhibit called “Votes for Women” beginning August 26. This exhibit will feature the stories of more than 40 Minnesota women involved at the time including Harriet Bishop, Julia Stearns, and Clara Ueland. Who were the local women who took part in suffrage efforts? What was this time period like for everyone?

Gina Kirkwall Glasoe, born in 1876 in Rushford, was president of the local WCTU (Women’s Christian Temperance Union) when she lived in Faribault; she also was the district chairman of the Third Congressional District of the Minnesota League of Women Voters as well as being very involved in many other community and church groups.

Mary Elizabeth Meighen, daughter of Judge Dryden Smith, was born in 1854 at Spring Valley. Meighen was a teacher in Rushford, Fountain, Spring Valley, and Grand Meadow until she married her husband Joseph Peter Meighen, whose father owned the Meighen Store in Forestville. In 1920 she attended the Democratic National Convention as an alternate from the First Congressional District. She was an active member of both WCTU and the League of Women Voters, working diligently for women’s suffrage.

Yet another local leader was Mrs. Ralph (Henderschott) Parker. Mrs. Parker was one of the organizers of the Fillmore County League of Women Voters. Her husband was the county attorney and a representative in the Minnesota state legislature. 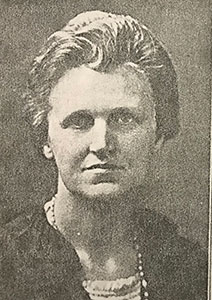 The League of Women Voters declared their purpose and work was not to support any political party, but rather to “present and stand behind a platform of social and moral issues,” according to the Rochester Daily Post and Record in their December 2, 1919 issue.

The Women’s Christian Temperance Union stressed that it was “greater and purer than any political party.” (Houston Valley Signal, April 10, 1890) Both the WCTU and the League of Women Voters were involved in the suffrage movement.

What was the atmosphere like during this time period? A check of local papers from this time gave the answers.

The M.E. Ladies Aid regular March meeting in 1920 was cut short as most of the members left for another meeting because of interest in an impartial discussion of women’s suffrage. The Preston Times went on to report who had served coffee and cake for the regular meeting. Women were in the midst of great changes to their place in society.

Not all women were ready for the changes that the 19th Amendment would bring; this was a complete upheaval in the norms of the day. In the July 22, 1920, issue of the Rochester Daily Post and Record, the editor addressed such women, “I venture to plead that they will accept the full responsibility of enlarged citizenship and give to the best in the Republic their suffrage and support. Have confidence in the Republic. America will go on.”

In Levang’s Weekly, a Lanesboro paper, the announcement of the ratification of the 19th Amendment was covered in a short paragraph in their September 2, 1920, issue noting that the American women would now be eligible to vote in the November presidential election as well as state and municipal elections. This added an additional 17,000,000 voters to the general election.

The Houston Signal, a September 2, 1920, issue, reported that in Washington, anti-suffragist groups were petitioning Judge Siddons of the Supreme Court to issue a “show of cause” order to Secretary of State Colby to “restrain that official from proclaiming the 19th Amendment as law of the land.”

Secretary Colby signed the 19th Amendment with “little ostentation” according to the Houston Signal. This was done in an attempt to avoid the anti-suffragists groups. “In fact, Mr. Colby just kept within the line of dignified action and two leaps ahead of undignified interruptions,” reported the Signal. Telegrams and phone calls had poured in the night before urging Colby to either delay or hurry in the signing of the amendment.

In their September 23, 1920, issue, Levang’s Weekly voiced concern over the voting process since women could now vote. Could women really vote in all elections? Yes! Would there be separate ballot boxes for women? No! Many were concerned that the large increase in the number of voters would cause delays in compiling the returns. Obviously, this was a totally unprecedented procedure that was causing stress for many.

The Plainview News, in their December 31, 1920, issue, published that anti-suffragists were planning to “agitate for the repeal of the 19th Amendment in order to effect a resubmission of the question to a general referendum of the people.” The article went on to note that it would take as much effort to repeal an amendment as it did to pass it originally. Women would now be amongst the voters and would not be likely to vote to repeal! The article suggested the anti-suffragists would do better to perfect the electoral system and correct its flaws at the state level and “develop an ideal ballot.”

In the October 20, 1921, issue of the Preston Times the question was asked, “Is the husband the undisputed head of the house even in the legal sense now that the 19th Amendment is in force?” The Supreme Court’s anwer? Yes! Women had the right to vote now, but the rest of the society had not changed.

The Preston Times, in the March 30, 1922, issue had an article titled “‘Equal Rights’ for Men.” Women had not quit seeking “equal rights”; the 19th Amendment had given women the right to vote, but women did not have equal rights in all portions of their life. The Times reported that Senator Fox of Maryland had presented a bill before Congress to ensure men their “rights” including alimony in divorce, and that women convicted of assault be whipped just as men were. It also stated “that males and females are born free and that neither shall be granted any privileges that are not enjoyed by the other.” Women would be expected to contribute at least one-half of the expenses of the home. These ideas were considered very extreme in the 1920s!

Want to learn more about the 19th Amendment and the role Minnesotan women played in this historical time? Be sure to check out the online exhibit “Votes for Women” at MNHS.org beginning August 26!