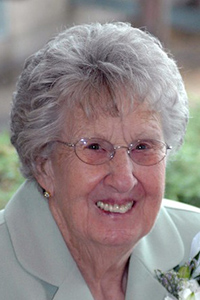 Genevieve Arline (Hanson) Brown, 93, passed away on October 30, 2019, after a short illness at her home in Princeton, Minn.

Gen was born on April 13, 1926, to Emily (Tucker) Hanson and Tedeman Hanson in Irving, Wis.  Gen was the second youngest of nine children.

After graduation, she worked as a conductorette on the Minneapolis street car lines where she met the love of her life and husband, Warren Earl Brown of Chatfield, Minn.  They were married at the Little Norway Lutheran Church in Albion, Wis., on April 5, 1947. After moving to the family farm with Warren’s parents near Chatfield, they raised two children, Sandra and Dennis.

Along with being a housewife and mother, Gen was employed by the Chosen Valley High School as head cook until they moved to Loveland, Colo., in 1970, where they opened a business selling their hobbies of antiques and coins along with Gen being employed as head cook at the Front Range Community College in Fort Collins, Colo., and a local nursing home. After retirement, they moved to Omaha, Nebr., to be closer to their son and daughter-in-law. Warren passed away in 2006, and Gen remained there until she moved with her son and daughter-in-law to Princeton, to be closer to her great-grandchildren in Maple Grove, Minn.

She is survived by her son Dennis (Donna) Brown, one brother, Henry Hanson; and two sisters-in-law, Alice Hanson and Lorraine Hanson.

Services provided by Riley Funeral home in Chatfield Minn., at 1 p.m. on  Saturday, November 16, 2019, with visitation one hour prior to service. Burial will be in the Chatfield Cemetery with her husband.

She was a kind and loving soul who and will surely be missed by all that knew her. May she rest in peace.

To share a condolence or memory with the Brown family, please visit rileyfuneralhomes.com.