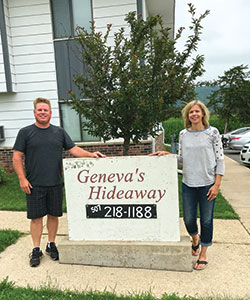 As of May 1, Geneva’s Hideaway in Peterson has been under new ownership. May was already a busy month for new owners, Matt and Jenny Helgemoe; it was planting time for farmer Matt, while Jenny was busy wrapping up her 19th school year at Rushford-Peterson as a counselor. When the couple learned that previous owner Terry Highum was ready to sell Geneva’s, however, they decided to add even more to their full plates.

When asked why, Matt, who has lived in Peterson his whole life, responded that it was Terry Highum, his old teacher and coach; it was Geneva’s; and it was Peterson! Matt looks forward to keeping the business in Peterson, and the couple plans to keep the name “Geneva’s,” noting it was named after Terry Highum’s mom.

Matt, who is “extremely diversified,” has a business degree from Luther College and has always been interested in real estate. Matt and Jenny  wanted their girls to learn more about business. Jenny, who is originally from Lanesboro, knows the area well and is very accustomed to the tourism culture. Neither are afraid of hard work, and apparently neither are their daughters! At Geneva’s, they’ve had the opportunity to work closely together as a family, and the girls have gotten away from technology and their devices. The girls have been working with Matt and Jenny at Geneva’s 90% of the time. Since May 1, the girls have been a part of shampooing carpets, taping and painting walls, vacuuming, making beds, power washing sidewalks, building a fire pit, and painting the sign out front. Jenny added that one of her favorite sights during that time was Matt washing windows!

While this year time only allowed for deep cleaning and painting of the units, Matt and Jenny plan on updating one unit a year with vinyl plank flooring and cabinet refreshing. Matt’s parents, who live on the same farm as Matt and Jenny, have been helping as much as possible. Matt and Jenny hope to take advantage of his mom’s landscaping and floral expertise and advice to add a homey touch to Geneva’s, using perennials and shrubs next year.

Geneva’s Hideaway has seven two-bedroom units and one one bedroom unit. The units are 700 square feet, and each unit includes a full kitchen. It is run as an Airbnb; customers sign up online, choosing from literally millions of offerings. The Helgemoe family had used Airbnbs on previous family and travel vacations, and knew the concept worked well.

Understanding their market, the Helgemoes have priced their units in a very reasonable range from $100 to $140 a night. They often have extended stay customers and have rented the entire building to some groups. Currently, they have units rented to people from Texas and Michigan who are staying for four or five days.

There is no written-in-stone check-in time at Geneva’s Hideaway. Matt and Jenny make a point to keep it flexible. According to Matt, the last thing a person wants on a vacation is a bunch of rules. They do their best to make the units warm, welcoming, and relaxing for their guests. Each unit has a coffee maker and fresh coffee at the ready.

Matt and Jenny love their location. They work collaboratively with their neighboring businesses, and friend and neighbor Terry Pelzel is willing to help out. They have plenty of outside green space with a shelter area and an expansive yard for the guests to use. Since they are located right next to Driftless Trading Post, guests can easily line up their Root River recreation. The Peterson museum is right across the road for history buffs with bike rental available there. Matt appreciates that the city of Peterson has strived to open up to tourism. Geneva’s Hideaway will be open year-round to take advantage of fall and winter tourism as well.

Good luck to the Helgemoe Family on their new business endeavor! Hopefully, they will be welcoming visitors to Peterson for a long time!