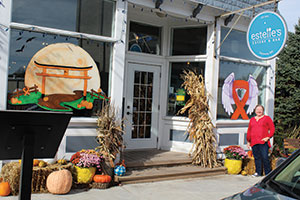 Art and window painting has always been a part of Geri Hanson’s life. Her father owned a gas station in La Crosse and, when she was a child, she often helped him paint the windows with decorative pictures. Geri’s mother was artistic as well. “My mom was incredibly crafty and painted a lot,” Geri said.

One of Geri’s recent projects was painting the windows of various businesses in Harmony. Cindy Ofstedal from the Promotions Committee with the Harmony Area Chamber of Commerce contacted Geri and asked if she would be interested in the project. Geri thought it sounded like a great idea and jumped on board. She loved the idea of creating something that would promote a sense of community. “I think it’s really lovely,” she said. “Harmony’s really just kind of stepped up.”

Geri works full-time as a paraprofessional at the Chatfield public school along with three part-time jobs. She doesn’t consider painting to be one of them. “This is my hobby,” she explained. In addition to window painting, she also enjoys painting murals and other mixed media arts. She occasionally does art shows with the rest of her family as they all enjoy painting and creating art projects. Her niece Lena is in seventh grade and has inherited her family’s artistic aptitude. “I like that the art gene has gone down one more generation,” Geri commented. Geri grew up in Wisconsin, but now lives in Fountain with her husband. Her grandparents were originally from Henrytown so she feels that being in Fillmore County is just going back to her roots.

In 1985, Geri was living in the Twin Cities and started painting windows for businesses there. When she moved to Fountain, the craft fell by the wayside for a while as she focused on other things. Three years ago, she got back into it when the owners of Cabin Coffee, who are friends with her, asked her to paint their windows for the holiday season. Torgerson-Ostby was the first business in Harmony for which Geri painted windows. After that, her window painting took off in Harmony. “People saw it, and we went from there,” she explained.

It can take Geri up to six hours to paint one set of windows. First, she lays down a layer of white paint and then paints the colors of the design on top of that using acrylic paints. Since she works full-time at the school, her painting hours are restricted to late afternoons and weekends. The weather can make it more difficult when it’s raining or cold, but she doesn’t let it slow her down much. Geri’s even had to float her paints in warm water to keep them from freezing during cold spells. The hardest part can often be putting the final touches on a detailed painting, knowing that it will be scraped off the window at some point in the near future, but Geri reminds herself of Leonardo Da Vinci’s quote, “Art is never finished. It’s only abandoned.” She knows that even murals painted on walls in homes will probably be removed at some point and is okay with that. “It’s just paint. Paint over it when you move,” she said.

In total, 12 Harmony businesses asked to be included in the fall window painting that the Chamber had requested as part of the Haunted Harmony celebration. Asahi Loft, Estelle’s Eatery & Bar, Togerson-Ostby Floor Coverings & Store, Sterling Drug, Homespun Harmony, On The Crunchy Side, Bee Balm, Harmony Telephone, BReaKeRs, Harmony Spirits, Kingsley Mercantile, and The Shop are all sporting creative fall-themed paintings on their windows. Each painting is unique, but all have the similar elements of a sign, fall leaves, bats, pumpkins, and spiders. “They (the Chamber) didn’t want scary. They wanted something that the kids could enjoy during the fall festival,” Geri explained.

You can see Geri’s window creations around Harmony or by visiting her on Facebook at “This Artist’s Expression.”