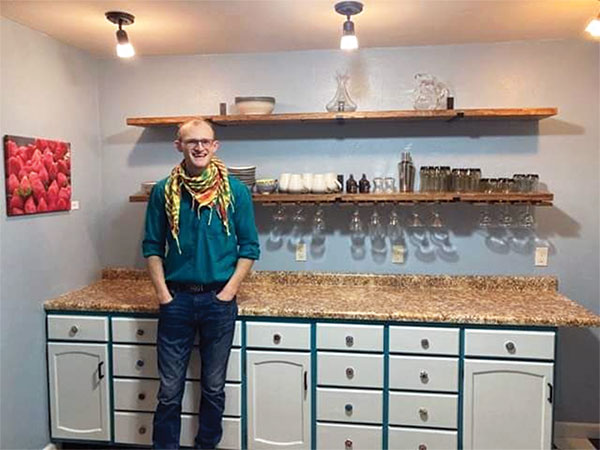 Many may remember visiting the small blue house, located on Harmony’s 1st Ave Southeast, to see the local dentist. Regular check-ups may have led to some uncomfortable moments, which may have included filling, drilling or even some pulling! Now, when visitors enter the home, there is nothing BUT comfort to greet them. The former dental office has been converted into a Mediterranean-themed Airbnb with clean lines, calming colors and artwork that features views of the world.

When Dr. Franz Sattler retired, he and his wife Diana converted the space into a guest house where they could stay in town or house family or visitors. Some minor changes were made to turn the dental facility into a comfortable gathering space.

In December 2021, Michael Himlie of Harmony began looking for a home to purchase with an idea of utilizing it as a personal home base while also offering it up for visitors to Harmony.

“An idea began to formulate,” Himlie said. “I wanted to make an investment into a home and make use of the house while I am still traveling for work.”

Himlie was also aware, as a member of the community, that lodging continues to be a need for visitors to the Bluff Country area. He felt creating an Airbnb would help fill that need as well as provide him with an income from that investment.

During a conversation around a campfire, Himlie said he was discussing his idea with the Sattlers and asked them if they knew any homes for sale or that might soon be coming on the market. At that point, the Sattlers offered their dental office as an option.

“They have been very gracious,” Himlie said about the Sattlers. “I pondered it for a long time, but determined I was able to make that investment, both financially and with my time.”

The fact that the house was already handicapped accessible was a huge selling point for Himlie. His goal was to create a space that would as welcoming as possible for many different types of travelers. “I wanted to be able to accommodate all those who come to Harmony,” he added.

The papers were signed in December, but Himlie said they allowed him to go into the house even before the sale was final.

“I think that’s partly why this process has gone so well and I’m ahead of where I thought I would be,” he added.

As Himlie began work on the transformation, he decided he would create two units to rent out. The first is a small living space that can accommodate two people, or three if they are feeling cozy, Himlie joked. There is a queen bed and a futon as well as a bath and small kitchenette. He plans to utilize this space for his own living area if it is not booked.

The second portion of the house is designed to house families or several couples. An option to rent the entire house is also available for larger groups with a dividing door providing access to both spaces.

The larger space is handicapped accessible, has a full-size kitchen, a bath, dining room and large living room. It has beds for six people, including being child-friendly with bunk beds. The kitchens are equipped with small appliances, pots and pans, dishes and silverware and basic staples one may need if choosing to do some cooking while relaxing at the house.

There are several options available to make that perfect cup of coffee, including instructions on how to use each device. Through his own travels, Himlie has chosen the French press as his favorite and made sure one is available for each unit.

Himlie pointed out there is an open space in the front of the larger space, with a bar and stools, that connects the dining room and kitchen to the living room. He envisions people sitting there, sipping coffee or wine, while visiting with the other guests.

When deciding on decor options, Himlie opted to follow the Mediterranean theme as it is one of his favorite parts of the world. He has mixed in a bit of culture from the Middle East, where he created so many memories from his work with human rights.

Himlie spent several years working as a human rights reporter and unarmed protection officer for people who are at risk in war zones. In essence, he explained, he makes sure human rights violations are documented and people are protected from war crimes.

“It’s definitely on my radar to return to that,” he said, especially in light of Russia’s invasion of Ukraine.

Following with the Mediterranean theme, Himlie named his Airbnb Petra’s Garden, which brings to mind a calming retreat.

His rooms are filled with items he has picked up during his travels and the artwork on the walls features scenes he photographed along the way. The canvases feature views of boats, water, and serene landscapes as well as many unique images from places many Americans may never see.

The renovations and adjustments to the house went a lot faster than Himlie expected and he credits that accomplishment to his friends and family.

“In addition to the many hours I have personally spent there, I’ve had a lot of family members and friends helping me along the way,” he said. “Every time you get to work with them, things go a lot better and faster with the help. We recently had a cleaning party – there were six of us – and we were able to get it all done in one day with the help of my generous family members. That all makes it possible for me to be at this stage.”

Himlie is planning an open house on Tuesday, March 8, from 4 to 7 p.m. so community members can tour the house before visitors begin booking stays. The Harmony Area Chamber of Commerce will be holding a ribbon cutting ceremony right away at 4 p.m., but Himlie said people are welcome to come and go throughout the evening.

“People who worked there or went there to see a dentist will be pleased by the transformation,” Himlie said. “You can see how it has changed.”

While he said there will not be a dentistry-themed room, he may have a few dental items strategically placed throughout the home someday.

The open house will also feature some homemade cookies, beverages and a chance to mingle with Himlie and community members. He also hopes people will take the time to look at the photos he has selected to adorn the walls of the spaces.

He will also be holding a drawing for a free night’s stay at the Airbnb that one can use themselves or pass along to family or friends who plan to visit Harmony.

If interested in booking the space, one can visit the Airbnb website or one can call Himlie directly to block off that date. He can also be reached at (507) 676-1910.

“I’m really looking forward to having people enjoy and inhabit the space I’ve gotten to influence myself,” Himlie concluded. “And I look forward to meeting people as they travel. I grew up learning customer service and it seems like second nature to be hospitable to our guests.”