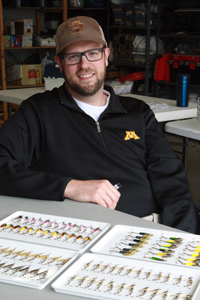 While underway for more than a year, Flowstone Fishing in Chatfield officially opened its online business this past April. Named for the area’s flowing, cool waters, which create subterranean mineral sheets, or flowstones, owner Bret Klaehn is hoping to combine his enthusiasm for fishing with a niche for quality, handmade lures and personalized, local service.

“I have been sort of obsessed with fishing and everything related to it ever since I can remember,” says Klaehn. “I have also always been curious and like to create things and mess around with things to change them or make them better. I think building lures is the nexus of these two things.”

Klaehn was a Grand Meadow transplant in junior high, the son of former school Superintendent Bruce Klaehn. When they moved to the area, the younger Klaehn quickly discovered the convenience of the area’s abundant trout streams. “I used bait and spinners to catch them at first and then eventually transitioned to fly fishing,” he adds.

Years later, after going off to school, earning his own teaching degree, and settling in Chatfield, Klaehn learned to tie his own flies. By that point, he was married with two young sons. Sharing his hobby with his boys, they would eagerly watch him work, asking to try it themselves. “It proved to be fairly difficult for them to do – it’s challenging enough for adults!” he jokes. “I looked into building inline spinners with them since it didn’t seem to involve as small of materials or require quite the same level of dexterity needed to tie flies.” Ordering several kits from different places, the hobby became something of a family project. “The boys loved selecting each individual component because it was ‘cool’ or their favorite color. They were so proud of those first creations,” he adds.

Enjoying their time together, “messing around and having a good time,” Klaehn soon found himself trying to mimic and create lures similar to those he’d used early on in his first days of trout fishing. “I started adding my own little twists to some of lures and liked the look of them. They fished well when I tested them, too. At some point, I guess the thought crossed my mind that someone might like to buy these and here we are,” he says.

The challenge of setting up the business was daunting; logo development, registration with state and federal agencies, building a website and online store, photographing the variety of lures, setting up packaging and shipping arrangements, creating promotional materials and a social media presence. Klaehn admits building the lures took a backseat during the the process, but he’s eager to get back to it.

He doesn’t find the process of making a lure terribly difficult, each taking just a few minutes once he gets rolling. Taking short lengths of stainless steel wire, he slides the various components onto it, then makes a loop in the wire to attach the hook, and finally twists the wire to secure it. “These types of lures have been around for hundreds of years and the basic design has essentially stayed the same. I like to think that I’m adding a modern touch to them with the components I’m using, and also making specific application to our local trout streams,” he notes.

The design and organization of components is a challenge and time consuming. With so many component options, he says it can quickly become overwhelming. “I’ve had to really force myself to scale down the number of lures I wanted to build to sell, because there are so many options. I’d like to offer people a variety to choose from, which I feel like I have done, while maintaining a manageable amount of components and products that I need to have on hand.”

The business aims to serve the fisherman’s needs, and is effective in catching an array of fish, including Brown, Brook, and Rainbow Trout, Smallmouth Bass within streams, Smallmouth and Largemouth Bass in lakes, and all types of panfish. Flowstone Fishing offers four series of handmade lures: Signature, Simplicity, Specialty, and Streamline. They vary in shape, size, color, pattern, metal components, and the type of catch that’s targeted.

Each series currently has three to eight styles available. “My wheels are always turning and by the time someone goes to check it out there might be 12 or two, if I ever decide to simplify things,” he jokes. “As I have fished spinners, I have formed the opinion that a little bigger is best; they are big enough to attract larger fish, but not so big as to deter the average size trout population in most waters. Others prefer smaller, ultralight lures, while some only go after big fish with big lures. I carry something to cover all those preferences,” he adds.

Admittedly a bit of a perfectionist, Klaehn continues to look for ways of tweaking and improving the lures. “I’m not just satisfied that they catch fish or that they’re good enough. When I fish the lures to test them, I am thinking about how a different blade style would change the lure’s action or how a different body would change the sink rate for fishing in a certain type of water,” he says. All part of the lure, as it were, of angling.

“You need to think about where you will be fishing and what you’ll be fishing for. Once you know that, the two biggest things to key on, in my mind, are size/weight and color. The size and weight help determine what type of food you will be imitating and also how fast or slow the lure will sink in the water column,” he adds, detailing the many parameters fishermen think about. “Color seems to be very important some days and irrelevant others. Some people swear by certain colors and patterns, where others prefer plain old silver or gold. You just never know.”

While he doesn’t currently offer custom lures, due to specialty parts being cost prohibitive, the idea has been there. “I will definitely entertain anyone’s idea on lures they’d like me to make for them, especially if it’s just a different combination of colors or components they see in my other stock lures,” he notes. “I will do my best to help anyone out. I see that as an area of growth in the future, to be able to customize components on my own, especially changing colors through powder coating or painting. At that point, taking custom orders will be simpler.”

He’s also considered adding hand-tied flies into the mix. “I still love to tie flies,” he exclaims. “As many types and options as there are in lure making, it pales in comparison to the number of variations and materials involved in fly tying. Figuring out a select few that I can tie well and that people want to buy will be the key.”

Not surprisingly, Klaehn’s favorite creations combine fly tying and lure making. “I have a couple lures designed to mimic small trout where I tie rooster hackle feathers onto the hook to add to the lure’s color and profile; like tying a simple streamer. They are the most time consuming to make, but it’s worth it in the end.”

“I’m still learning, honestly. It’s more the trial and error of finding just the right combinations of components to make them both attractive and effective that’s the challenge,” he adds. “When I look back at those first lures I made with my boys, I am amazed at how different they are compared to what I build now.”

“One of the best moments was my first official sale a couple months ago to the Root River Rod Co. in Lanesboro. That’s what really sparked me to get things going and make it all official. I think the first time you realize that someone is willing to pay you for something you love to do as a hobby is pretty special,” says Klaehn. “I’d love the opportunity to partner with anyone who is interested,” he says, enthusiastically. Looking ahead, he also hopes to start putting together assortments of lures for gift packs prior to the holiday shopping season.

He knows there are many brands of lures out there and lots of places to buy similar type lures, but Klaehn hopes people will consider supporting a small, family business. “I think people will find that if they try my lures, they are as high quality, if not higher, than the national brands. Flowstone wasn’t formed out of the need to turn a profit, but as an extension of my passion for fishing and I’m honored to have the chance to share these locally made items with the local community and beyond. I don’t want people to feel like they have to compromise on price, design, or quality in order to shop local.”

As for coming changes or events, Klaehn says he has some additional ideas. He’s hoping to add a page to his existing website to showcase the fish caught with his lures and he’s encouraging folks to send in their photos via Facebook or email. Adding further social media accounts, particularly Instagram and Twitter, is also in the works. Community Education classes, which he’s taught before, might also be coming down the line, as will be individualized presentations and classes for organizations and nature centers and hopefully partnering with local businesses for some possible cooperative sales.

“Personally, I’ll be spending lots of time with my boys and I’m hoping to go fishing a decent amount, you know, for Research and Development purposes,” he adds with a wink. 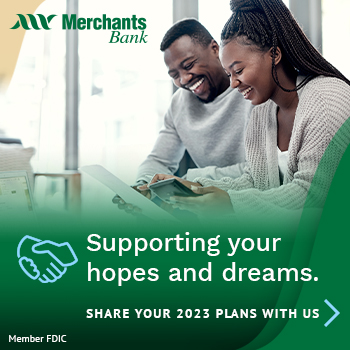