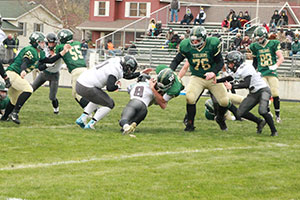 With the Fillmore County Journal expanding its coverage to include Grand Meadow, Spring Grove, and LeRoy-Ostrander, the naming of the All South-East “East” sub-district team takes precedent.  Seven of the teams in the sub-District fall under the “Journal 10” umbrella.  Section title game foes GM and Lanesboro each get a league high five A-D picks.  A pair of Johnson’s headline selections from the other five squads.  Of the 32 “First Team” guys, 21 are seniors, 10 are juniors, with one freshman.

It was an 11th straight winning record for third place Spring Grove (5-3), which earned four all-district selections – all seniors, including repeat honoree Caden Grinde (6’4” 170, WR/LB).  After receiving honorable mention last year, Isaac Griffin (6’1” 1165, QB/S) is First Team this season, as are Tristan Hammel (5’11” 175, OL/DL) and Carson Gavin (6’0” 160, TE/LB).  For a second consecutive season, Grinde shared the sub-district lead in receptions (29 in six regular season games) and was second in receiving yardage.  For the season, he totaled 419 yards on 41 receptions with 3 TDs.  He ranks third for SG in career receptions (119).  Grinde led the Lions in total tackles (125) and solo stops (53), punted, and held for extra-point kicks.  Triple-threat Griffin moved from receiver to quarterback for his senior season, where he led the league in both completions (71 in 6 games) and TD passes (10) while ranking second in passing yardage.  He had a strong ratio with twice as many TD tosses as interceptions (league games). Griffin was also the Lions’ leading rusher (5.1 yards per carry) and while kicking 21 extra points, was also the team’s leading scorer.  On defense, Griffin shared the league lead with four interceptions.  Including play-offs, the senior (103-201, 1,258 yards, 13 TDs, 10 INTs passing; 88-445 yards, 5 TDs rushing) accounted for 18 TDs.   Hammel (5’11”, 175 OL/DL) was undersized as a lineman, but excelled in the trenches as a three-time letter winner, two-year starter and now All-District.  He was the lynchpin as the lone returning starter up front on both sides of the ball.  Hammel ranks seventh on the Lion career sack chart (9.5).  Gavin (6’0”, 160 TE/DE/LB) moved into the starting lineup where at tight end, he averaged 19 yards per catch. Despite missing two games, he still ranked second for SG in total tackles (83) and tackles for loss (8).  Receiving honorable mention were two sophomores – Hunter Holland (5’8”, 155 RB/LB), who led the sub-district in kickoff return average (36.0) and Tysen Grinde (6’1”, 160, WR/CB) who shared the league lead with 4 TD receptions.

Gophers Get Four Selected All Southeast-White