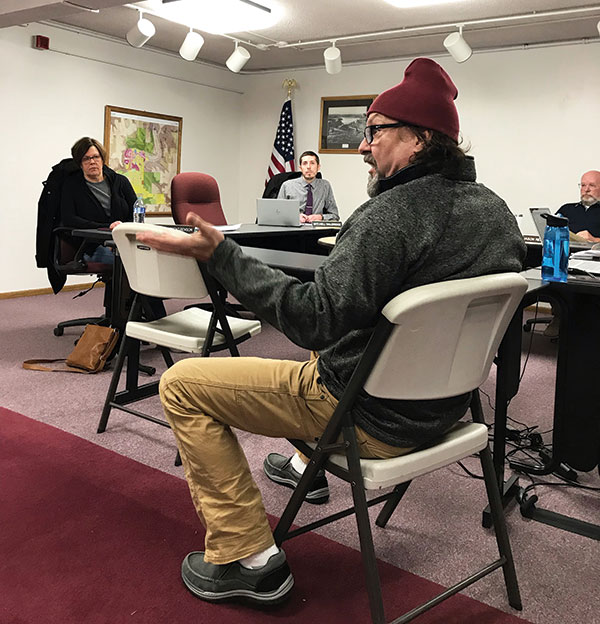 The Lanesboro City Council began their regular monthly meeting with a hearing on permitting food trucks in the city. Many local restaurant owners filled the room and spoke of their concerns to the council.

Hal Cropp of the Commonweal Theatre expressed his concern that the requirements of a 50-foot distance from a brick and mortar restaurant and the limitation of only two food trucks a day had been removed from the ordinance that the council was considering.

Scott Taylor of Pedal Pushers Cafe asked that the council look at the issue from the restaurants’ perspectives. He informed the council that there were 19 commercial kitchens in the city; towns the size of Lanesboro usually can only support one or two restaurants. Lanesboro has 11.5 times as many! Taylor stressed that if another food service wanted to open in Lanesboro, there were already plenty kitchens available. He noted that his own restaurant operates at a loss five months of the year.

Taylor told the council his restaurant has employed over 350 locals over the years. Food trucks on the other hand use city infrastructure without contributing. They do not provide bathrooms, dining rooms, or trash disposal.Taylor shared that Buffalo Bill Days is the slowest weekend of the summer for his restaurant. He asked that a 100-foot setback from brick and mortar restaurants be enforced with no food trucks allowed in the historic district and only two trucks be allowed at a time.

Kim Berekvam pointed out the unfair economic advantages of the food trucks. She also noted the specific rules restaurants must follow in the Historic Preservation District. Food trucks would not have to follow those rules. Berekvam gave the example of Galena, Illi., not allowing food trucks in their historical district because they want to preserve the ambience of their old-fashioned town.

Berekvam asked that the ordinance specify that the food truck must come from the same brick and mortar restaurant on that same property. With three new restaurants coming to town, she asked that the council provide a fair playing field for them.

Lou Hamann of High Court Pub expressed her disappointment that the recommendations of the Planning and Zoning Commission weren’t listened to. “We can’t have a light on our sign, but food trucks can!” she commented. She shared her concern that since food trucks will have no outside seating, their customers would bring their food to her outside deck to eat there.

Jon Pieper of Old Village Hall asked for fairness. He suggested taking the average of operations costs of restaurants per year to determine the fee food trucks should be charged. He shared that tax bills are between $7,000–$10,000 a year.

Sarah Pieper asked what food trucks are charged for Buffalo Bill Days and was told it was $300 for the weekend. An annual fee of $65 is on the proposed ordinance for food trucks. Sarah felt the city resources used by the trucks would cost more than that. She was also concerned about whether the trucks would be collecting city and county taxes.

Trish Capua of Hotel Lanesboro mentioned that she was up for sale and had a potential buyer back off after learning food trucks may be allowed. She urged restricting the times or days food trucks would be allowed. Tyler Shipton of Juniper’s Restaurant agreed. He’s had a tough winter and needs a profitable summer to make it. If he’d known trucks were going to be permitted, he shared he might not have bought his business.

Pat Shanahan, owner of Iron Horse Outfitters, urged the council to not permit food trucks. While he’s not in the restaurant business, he felt food trucks were “off our brand.” Although he felt the experts, the restaurant owners, were not consulted, Mayor Jason Resseman assured him the owners were considered and consulted throughout the process.

During their regular meeting, the council decided to table the food truck ordinance until next month to give them more time to consider the citizen input.

In their regular council meeting, the council:

• Approved $26,860 epoxy flooring for the emergency services building (this had been omitted earlier);

• Heard the 2021 audit review from Andrew Forliti of Smith Schafer; the unassigned fund balance in the general fund is $416,178 which equals 53% of annual expenditures, a very favorable balance;

• Approved the use of American Recovery Funding to pay for the replacement of the community center boiler; Drazkowski Heating and Cooling will supply the more efficient $49,800 boiler with a delivery time of three days.

The next Lanesboro City Council meeting will be June 6 at 6 p.m. in the Lanesboro Community Center Meeting room and on zoom. The public is welcome to attend.