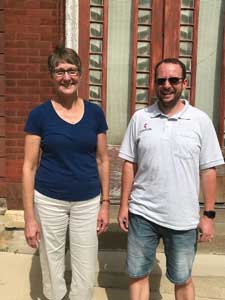 The Bible has many stories of people who were called to serve God in new and different ways.  These believers were asked to take a “leap of faith” to answer the calling.  This is also the case for two new pastors in the United Methodist Church, Pastor David Stoeger and Pastor Pam Seebach.  They recently sat down to explain the calling they have answered to serve five Methodist congregations in Fillmore County.

Pastor Stoeger explained that, “Wykoff was my field education for the last year.  I was finishing up my seminary courses.  So I served as a student pastor in Wykoff,… and this year I told our district superintendent that I’m going to need a little bit more, now that I’m graduated from seminary.”  He said the superintendent looked at the map and realized that with several area pastors retiring, a five-point parish would be a workable solution.  Pastor Seebach said that in April, when she was asked about partnering with Pastor Stoeger in this way, her reaction was, “Good, I like it!”

Pastor Seebach gave an overview, stating, “Between the two of us, we have five churches.  David has Wykoff, we share Harmony and Preston, and then I have Mabel and Newburg.”   The Mabel and Newburg churches worship together, with alternating months worshipping at each church.  She added that the change officially starts July 1, stating, “David and I will take over the pastoral duties, including leading worship.  Preston and Harmony will each worship at 8:30, and then Wykoff and Mabel/Newburg will worship at 10:30.  However, on July 1, Harmony has a tradition of worshipping ecumenically in the park because of the Fourth of July celebration, so that’s at 9 o’clock… And July 1 next year, service times will swap, so some other people get to sleep in.”

The retiring pastors who created the vacancies are Michael Smith, who is retiring after serving Preston for eight years, and Harmony for over 10 years.  Sharon Goetzinger is the pastor retiring from Mabel and Newburg churches.  Regarding his background, Pastor Stoeger said, “My roots are in the area.  I started 10 years ago.  I started at KFIL in Preston, and worked there five years.  Then, Mabel and Newburg was my first appointment.”  He said after a one-year hiatus doing missionary work in Chicago, he’s glad to be back in this area, adding that he and Pastor Seebach “have a heart for these communities.”

Asked what challenges they anticipate, Pastor Seebach shared, “Well, we’re going to be busy, with five congregations to care for.  But’s it’s really a good thing because there are some things that can be shared.  For example, maybe a Lenten service,… or a confirmation class, if it works out.”  Pastor Stoeger said the main advantage is, “We get to work together and back each other up.”

Regarding the transition and getting to know their flocks, Pastor Stoeger said, “A big part of the pastoral role is to recognize gifts, and develop those gifts, and then put those gifts where they are most effective… equipping disciples to be disciples in their community.”

Pastor Seebach shared that she spent 20 years working as a social worker in the Federal Bureau of Prisons in Rochester, so she’s really looking forward to this new challenge and sharing the love of God with people.  She added that so far, all of the feedback she’s heard from the congregations regarding the upcoming transition has been very positive.

Pastor Stoeger said rural communities are changing quickly, and he added, “One thing to note… this is not a merger… we’re just serving (the five churches) collectively.”  Both pastors stressed that every congregation has a unique personality, and they are eager to learn about each church’s people, traditions, needs and strengths.