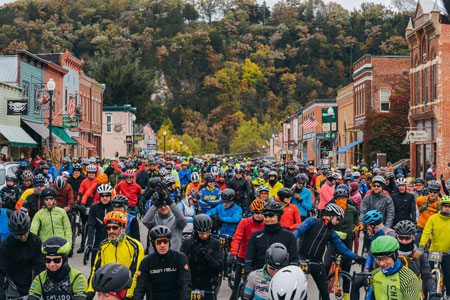 “Race it and set a record. Ride it and take in the beauty. Either way, get filthy,” Trenton Raygor quoted.  He was referring to the Filthy 50 bike race that took place in Lanesboro on October 12. This was the bike ride’s seventh consecutive year, but the first in Lanesboro. The previous six were held in Stewartville where Raygor grew up and his parents still live. Trenton’s dad, Joel was actually the inspiration for the Filthy 50 and still plays a big part in the event along with Trenton’s brother Jackson. After a bout with cancer, Joel was told by his doctor that he needed to get back into shape so he dusted his bike off and hit the gravel roads around Stewartville with his sons and a friend. Several years later, they completed a 100 mile bike ride on the gravel roads and began talking about how much fun it would be to give other bike riders the same type of experience. So they put together a route and planned a BBQ in Joel’s backyard before putting it out on social media to see if anyone was interested. By the next day, 174 people had responded, and Trenton knew they were onto something. Joel’s backyard wasn’t equipped for such a large crowd, and so he began talking to business owners around Stewartville to figure out how to hold the event. Two hundred eight people showed up that first year. “It was fantastic,” Trenton said. He received numerous requests from the riders to make it an annual event, and the Filthy 50 was officially born. Five hundred people attended the next year, 800 the year after that, and by the fourth year, 1,000 people signed up.

In just seven years, the popularity of the Filthy 50 has been widespread with riders flying in from all over the country and even Spain to participate this year. Some are high-caliber racers that are there to compete, while others are there for the scenery and the experience. “You can approach Filthy any way you want to,” Trenton commented. “Fall colors are definitely an attraction and one of the reasons we do it this time of year,” he said, adding that doing it so late in the year also gives riders the chance to build up strength over the summer months in preparation for the race.

For the first six years, it worked well to hold the Filthy 50 in Stewartville, but this year brought some changes, such as the sale of the land that was used to host the traditional after-party. Another business that partnered with the Filthy 50 to allow them to park a large number of the attendees’ cars was also sold. There was talk of shrinking the event or canceling it altogether before they decided that it was worth exploring alternate locations. Angie and Scott Taylor, owners of the Pedal Pushers cafe in Lanesboro, are alumni of the Filthy 50 and asked if Lanesboro had been considered. Trenton and Joel scoped out the gravel roads around Lanesboro and realized that the roads and the scenery were too good not to share.

After getting approval from MnDOT and Fillmore County to shut down a section of Highway 16 in Lanesboro for the ride, Trenton, Jackson, and Joel attended the May 2019 Lanesboro city council meeting and received permission from the city to hold the event in Lanesboro. “It feels like a whole new event, but in an exciting way,” he said.

For the first six years, there was no cost to the riders, but with the location change, the costs went up. Rather than funding the whole event himself, Trenton decided to charge an entry fee with all of the proceeds being donated to the Zumbro Valley Health Center, whose clinic in Harmony provides mental health support services to the greater Bluff Country community. Trenton noted that he chose the center because mental health is a meaningful cause to him. “It’s important to me to give back to an organization that’s serving an under-served community in that way,” he said. The organizers are pleased to share that the 2019 Filthy 50 race raised $18,318.56 for the Zumbro Valley Health Center.

Nine hundred forty-nine people registered for the Filthy 50 this year, which was just 50 less than the previous year. Many of the registrations were from repeat riders, which was impressive considering that last year was nicknamed the “Filthiest 50” due to rough weather. “The Filthy 50 has taught me that our riders are a pretty special breed,” Trenton said. “Mother nature isn’t someone who keeps them in bed, but helps them pick out what to wear.”

Snow was forecast for the day of the race this year, which meant that not all of the 949 registered riders showed up at the starting line. “We still had 534 of them, which is a fantastic number for a day like that!” Trenton said. “The weather definitely got interesting, but our riders embraced it and enjoyed it, as they tend to do.”

Mayor Resseman shot off the starting pistol at the beginning of the race on Saturday. After the race began, the bikers rode for about a mile and a half on pavement and then spent the remainder of the ride on gravel roads for a total of 50.9 miles. They also had the option of riding the Pretty Filthy which was just under 24 miles. When the riders were finished, they were greeted with the traditional after-party for which half of Coffee Street was closed. There were raffles, sponsors’ tents, live music, food vendors, a winners’ podium, and free beer from BlackStack Brewing out of St. Paul. The brewery even created an exclusive IPA for the Filthy 50 called “Filthy” which was only offered at the event.

Trenton plans to hold next year’s Filthy 50 in Lanesboro as well. Lanesboro Mayor Jason Resseman is in support of that. “We look forward to this being an annual event for them and we’re really excited,” he said. “Lanesboro is the hub of tourism in Fillmore County and they’re a natural fit. We welcome them gladly.”