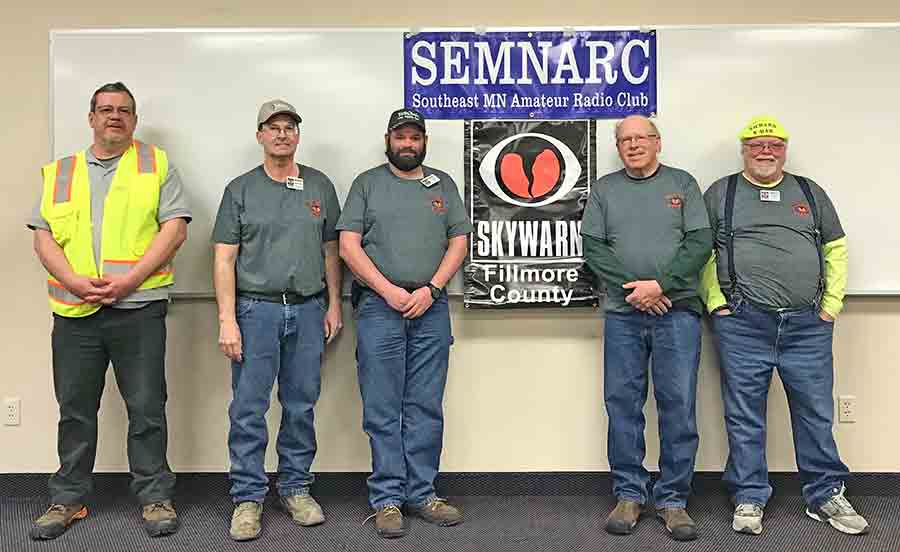 With spring approaching, many of us begin thinking more about the possibility of severe weather. Thanks to Fillmore Skywarn, a volunteer storm spotting group, we can rest a little easier. The storm spotters stress safety as the highest priority as they look for storms; people are placed to the side or in back of storms and never cross a bridge without knowing there is another way out of the area. Their job is to observe the storm and report it to the proper emergency authorities. Club leader Jim Miller emphasized that they are NOT storm chasers. Brian Stockman added, “We try not to become a victim!”

In 2018, Bill Puffer, Brian Stockman, Justin Johnson, and Jim Miller formed SEMNARC (Southeast Minnesota Amateur Radio Club), a club of ham radio operators which all the Skywarn members belong to as well. Using their ham radios, they are able to communicate regardless of power or internet outages. This capability provides assurance that warnings are able to go through. Stockman serves as the “tech nerd,” a position he’s well qualified for, having worked on the statewide 911 system.

The club members have no professional training in meteorology, but they share an enjoyment of all types of weather. By combining their hobby of ham radio, their interest in weather, and a willingness to volunteer their time to serve the communities of Fillmore County, they provide a valuable resource for the residents.

Skywarn has a structured, prescribed manner of operation. Weather forecasts are checked every morning as well as severe weather outlooks from La Crosse NWS and updates from severe storms prediction center in Norman, Okla. If a storm is brewing, the net control (the person who stays at a home base during a spotting situation) touches base with local emergency personnel. When the La Crosse NWS suggests activation of the spotters, the person serving as net control decides where to place the spotters based on radar observations. Each spotter has the same maps of spotter locations and goes to the assigned spot. The maps cover all of Fillmore County and part of Mower County. The net control coordinates with emergency managers and fire departments and monitors radar to ensure the spotters remain safe.

The criteria for reporting depends on the type of weather. The spotters carry an anemometer to check wind speeds. Usually winds over 40 mph and hail as large as a quarter or larger are reported using ham radio repeaters to net control; the information is then passed on to Don Kullot, Fillmore County emergency manager, and John Dols, Spring Valley emergency manager. They then relay the information to La Crosse NWS via the state’s Armer radio system.

Each spotter has the app APRS which uses radios and phones to transmit their exact locations. The group has two ham radio repeaters and a third line, GMRS (general mobile radio service). Fillmore Skywarn has a private channel on the phone app Zello, which uses voice over IP addresses.

Skywarn uses doppler and has multiple sources of radar; it has access to high definition, fast looping radar which shows a lot of details, even including debris in storms.

In the December 15, 2021, storms, Skywarn actually activated the warnings. In total Skywarn activated warnings 10 times in 2021. La Crosse’s radar does not pick up activity close to the ground in the Fillmore County area because of its distance and the fact that radar travels in a straight line rather than following the curvature of the earth. As a result, Skywarn provides needed information. Skywarn also does damage assessment following storms.

Right now, Skywarn is looking for more members. If weather and ham radios pique your interest and you would like to help your community, consider joining the group. Meetings are usually held at the Spring Valley ambulance building on the third Saturday of the month. It’s not necessary to be a ham radio operator to be in the Skywarn group — there are other communication options available to report to net control. You can be a mobile spotter or spot from your home.

A new member will need to take the NWS training either in person or online; a class will be held in Rochester April 13 and multiple other sessions will be held in the area. The classes are open to the public.

If you want to get into ham radio, the ham license has been around $14 for 10 years. Handheld radios go for around $50, mobile radios run $300–$400, and a house station costs $2,000. Mentoring has a big emphasis, veteran hams are very willing to help out novices as mentors.

You can check out SEMNARC Facebook page, their webpage at fillmorecountyhams.org or call Justin Johnson at (507) 951-2457 or Jim Miller at (507) 261-7695 for more information. You can also email the group: skywarn@semnarc.org

Jim Miller emphasized, “Fillmore County has had storm spotters before; volunteer fire departments, the sheriff’s department, and other emergency services are the backbone of storm spotting for Fillmore County.” The Skywarn group adds to what they do and complements their work. Join Skywatch and help them!