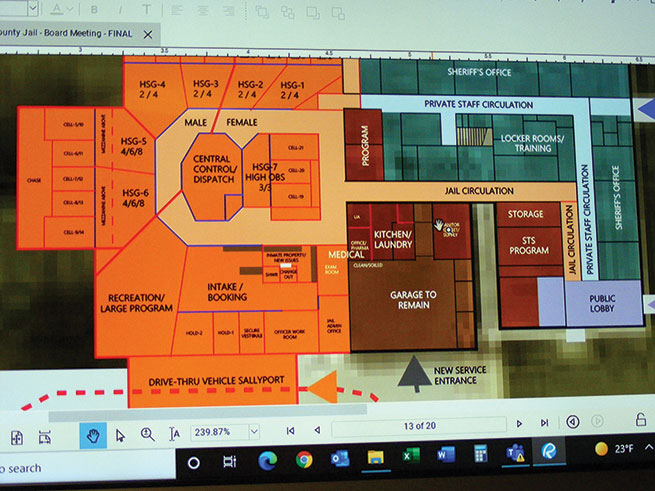 The architect firm BKV Group walked the Fillmore County Board through the planning process and presented a preliminary concept for an upgraded jail at the board’s March 8 meeting.

Henry Pittner, senior jail planner, and Bruce Schwartzman, partner most involved in correctional work, presented a preliminary plan for the county’s jail. The full-service firm has been in operation for 43 years. It has worked on over 30 jail projects in the Midwest. After a site analysis, four options were presented.

The favored option discussed was an expansion to the west of the existing facility. There is plenty of room and they can keep the sheriff’s offices. The metal building would need to be relocated or rebuilt.

The design will need to be approved by the Minnesota Department of Corrections. The new connected facility would house cells, intake/booking, indoor recreation/large program, and control/dispatch center. The plan is for 35 beds and 11 or more separations.

The existing building will be modified and refreshed to house locker rooms, conference training rooms, space for medical programs, kitchen/laundry, and offices. New boilers and air handlers/distribution will be installed. The garage will remain. The existing entrance will be for staff and there will be a new public entrance. Pittner explained what he was presenting is just a concept plan, nothing final.

The new addition on the west side will allow all cells to be seen through glass by central control. It could house a peak female population of eight. There will be three high observation cells. With good site lines from the control center, one officer can manage the inmates. Central control can visually see all cell fronts, dayrooms, holding cells, and recreation program.

The facility will be a 365-day Class III facility. Today the jail is operated with 11.5 FTEs, that is expected to remain the same. Pittner sees the next step as checking with the Department of Corrections to confirm design and the staffing concept.

Schwartzman favors working with multiple subcontractors through a construction manager. He expects it will take two months for the concept planning process and nearly two months to produce a schematic design. Overall, the project could take about two and a half years from now to completion.

The board unanimously approved a motion for the county to move forward with BKV Group, working with County Attorney Brett Corson to draft a contract based on using a construction manager.

•Bret Kohn, Highway, presented two bids for the purchase of a 500-gallon hydro-seeder with mechanical paddlers. The low bid in the amount of $13,840.64 submitted by Northern Tool and Equipment was approved. The seeder seeds with mulch, and fertilizer, if desired. Used in ditches, it can get grass growing better and control erosion.

•A request was made for the purchase and installation of three new oil reels with meters and two new pumps for the distribution of oil to service the fleet. Kohn said the current system was put together in 2005 and is getting worn out. The low bid from High Forest Automotive Equipment in the amount of $8,326.12 was approved.

•Pam Schroeder, airport office manager, asked the board to consider an agreement between the state and the county for the use of an Airport Rescue Grant under the American Rescue Plan Act. The agreement was approved; the amount of the grant is $32,000.

•Sheriff John DeGeorge explained to the board that there are three contracts which are all called Motorola Contacts including the Ancom Motorola Service Contract, the Motorola Service Agreement, and the Motorola contract through the Department of Transportation for the county’s share of the ARMER radio system. He is working on a document with the details of each contract. All are funded with 911 grant funds. All are essential for operation.

DeGeorge explained that new squad cars are not available at this time. This is true for all law enforcement departments.

•The first consideration on the draft changes to the Telecommuting Policy was approved. Department heads will be expected to administer the policy. The board will have the right to make changes to the policy at any time.