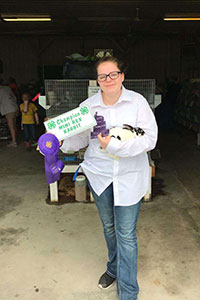 Eleven years of hard work has led Eve Grabau to become a 4-H State Ambassador. Starting at six years old, Eve has found her love for 4-H and the people involved in 4-H. Eve participates in many categories, but her favorites are crafts, static and livestock demonstrations, fine arts, and the rabbit project. Eve also loves county and state fair, working with people across the state, and helping/leading others be the best they can be.

Eve has received many blue ribbons, along with grand and reserve champions with her static and livestock demonstrations and also rabbit and rabbit showmanship/interviews, at both county and state fair level.

The Grabau family has been involved in 4-H for four generations, which has impacted Eve’s 4-H journey tremendously. Amy Grabau, Eve’s mother, was also a State Ambassador during her time in 4-H. Amy pushes Eve to try new camps, leadership positions, and projects which resulted in Eve beginning the process of applying for State Ambassador.

Eve has also been a Fillmore County Ambassador and Federation historian and is now adding Minnesota State Ambassador to that list.

BLU (Building Leadership & Understanding) and YELLO (Youth Exploring Leadership and Learning Opportunities) are leadership camps that Eve has attended. She is a part of the education team to help plan the educational parts of camp. This year Eve helped lead the “Virtual Springboard,” where she educated the 4-H youth on state fair and different leadership events that happened throughout the year.

COVID-19 has impacted 4-H in many ways, from the county and state fair being cancelled to 4-H’s Clovemart being closed for part of the summer. Clovemart was a 4-H shop which sold clothing and accessories. The money raised from the shop helps the 4-H afford retreats and camps that they attend to. If the state fair would have happened you would have seen Eve at the front gates to welcome and help visitors and state fair participants around the 4-H building.

4-H has something for everyone! Whether you like fine arts or showing livestock, there are 67 project areas so you are bound to find a category you enjoy. There are also opportunities for leadership positions such as club or federation officers and you also can become a Fillmore County Ambassador!