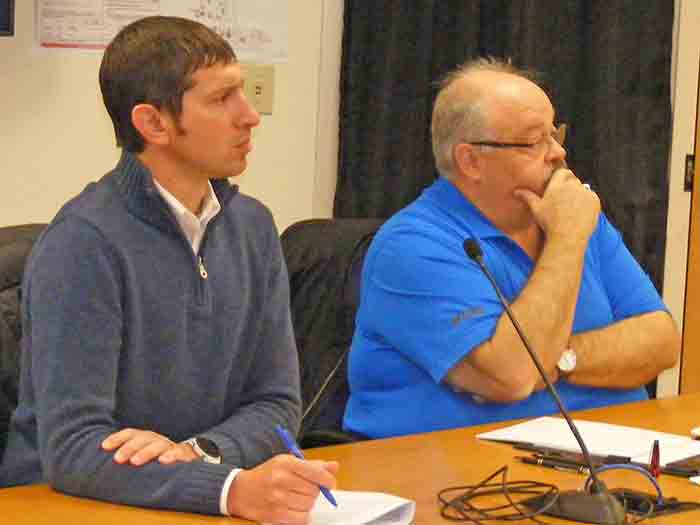 County Administrator Bobbie Hillery called the January 4 annual meeting to order. The first order of business was the election of officers for 2022. Mitch Lentz was elected board chair and Larry Hindt was elected board vice chair.

Hillery asked that the legislature provide long term funding and sustainability for any new programs or changes to existing programs, so the financial burden does not fall solely on Minnesota counties.

The DNR owns a significant amount of property in Fillmore County. Commissioner Randy Dahl insisted there is a severe lack of maintenance by the DNR on these lands.

County Engineer Ron Gregg asked that transportation revenue be provided through traditional bonding programs for bridges. The county supports additional funding of the Highway User Tax Distribution Fund; funding should come from all highway users including users of electric vehicles.

Social Services Director Kevin Olson asked for modernization of Human Services programs to improve operational efficiency in performing health care eligibility functions. Funding for the system has steadily decreased. It can take hours to make changes in the system. Olson suggested the health care procurement process doesn’t reflect the voice of small counties in outcomes. He supports statutory changes that would clarify and affirm county authority.

Director of Nursing Jessica Erickson supported increased funding to the Local Public Health Grant. The county supports a permanent emergency fund for quick access to respond to infectious disease outbreaks. Lentz commented that Erickson has been extremely active working with schools on public health during the pandemic.

Assessor Jason McCaslin supported a simplification of the property tax system. Minnesota has about 63 classifications, possibly more than any other state in the country. Davids said he didn’t know how to go about simplification as each classification has a legislative author. He admitted he was responsible for a few himself. McCaslin said the property tax system is out of control.

Auditor/Treasurer Christy Smith stated the county supports legislation that allows counties to recover administrative costs related to tax forfeiture. Revenues from property auctions should be used to first offset county costs. The county supports protecting counties, cities, schools, and townships from accrued interest due, as a result of tax court findings involving valuation errors made by the State.

Sheriff John DeGeorge requested legislators look at providing funding for all mandated training. DeGeorge explained the ARMER system put into place over a decade ago has benefited the metro region but has made service worse in this area due to challenging terrain issues. ARMER doesn’t work well for us. The cost to remedy problems through additional towers or mobile radio repeaters is extremely high.

DeGeorge suggested the need for a new jail is, in part, due to state mandates and regulations for county jails. The county asks that legislators consider making funding available for counties who face costs to update or build to meet Department of Correction mandates. DeGeorge emphasized the funding request was due to state “mandated” requirements. Davids agreed with the mandate point; if we make you do something, it is an unfunded mandate. DeGeorge suggested there could be a grant for required upgrades in recreational or program space.

County Attorney Brett Corson requested the gap in legislation which allows criminal offenders to be released from jail or have criminal charges dismissed under Rule 20.01 be fixed. Mentally ill criminal offenders are released with no supervision and services, creating public safety issues.

Corson also asked that there be an exception to medical privilege to allow law enforcement to obtain blood tests to be used as evidence in a criminal case when there is a death or substantial bodily harm to another person. Corson described the need for funding for more chemical dependency and mental health treatment beds.

Representative Davids noted the state has a $7.7 billion surplus. He is opposed to spending all of it as it will raise the base for future years. He is supporting a bill he has been working on to provide additional funding for the State Veterans Home in Preston.

Senator Miller thanked presenters for their input. He believes it will be a challenging legislative session with a divided legislature. We will need to work in a bi-partisan way.

•Ron Gregg introduced Joel Thoreson, who was appointed by the board to the position of Fillmore County Surveyor for a four-year term. He has been a licensed surveyor for 18 years and started his own business four years ago. He will not be a Fillmore County employee; he will serve the county through a professional service contract with the county. The four-year contract runs through early January 2026. He will receive quarterly payments in the amount of $7,500 for his services.

•A resolution was approved to apply for 2022 Help America Vote Act (HAVA) grant. This grant is to be used for the purchase of voting equipment.

•The resignation of Ashley Rinn, Social Services aide was accepted after seven years of service. A request to hire a replacement social worker to replace the case aide position choosing from the candidate pool list was approved.

•The resignation of Jessica Paulson, custodian, was approved after nine years of service.

By statute the county must set minimum salaries for elected positions including county attorney ($109,170) and sheriff ($99,184). These are minimums for a newly elected position.

•A resolution was approved to use the county website as an alternative method for bids, plus the local newspaper.