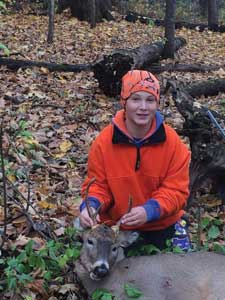 Deer Management Area 603, formerly identified as Permit Area 348 in Fillmore County, is entering the second year of management for Chronic Wasting Disease and there doesn’t seem to be a clear indication of how it’s progressing.

November 2016, the first positive infection in a wild deer was discovered near Preston. It led to an intensive DNR management plan and reclassification of the permit area. The management plan was essentially four-point: expansion of hunting opportunities and reduction of limits to lower population densities, mandatory testing of deer one-year or older, and prohibition of deer carcass movement without negative test result, and a ban on recreational whitetail feeding throughout southeastern Minnesota.

A September 2017 DNR report by Erik Hildebrand, Wildlife Health Specialist, and Lou Cornicelli, Wildlife Research Manager, notes a total of 11 deer were identified as carrying the disease within the area. The results followed the testing of 1,179 samples. A 16-day special hunt was held December 31 through January 15 and 873 deer were harvested during that time. Roughly 300 landowner permits were issued by the Department of Natural Resources in the permit zone to further reduce herd numbers, bringing the total number yielded to 775. When sampling numbers fell below the goal of 900, U.S. Department of Agriculture sharpshooters were brought in.

The disease is a neurological prion disease that affects cervids such as deer, elk, and moose. It is unclear how the disease was established, although theory speculation has ranged widely, but has not proven to be viral, bacterial, or fungal in nature. The disease is resistant to sterilization and it is not fully understood how it is transmitted. Dr. Clifford F. Shipley, University of Illinois College of Veterinary Medicine, who was a keynote speaker at a community forum in Chatfield last February, indicated the disease appears to be spread from animal to animal through infected feces, urine, saliva, and muscle or nervous system tissues.

“It causes a characteristic spongy degeneration of the brains of infected animals resulting in emaciation, abnormal behavior, loss of bodily functions and death,” says the DNR. “Observable behavioral symptoms may include noticeable and progressive weight loss, excessive salivation, and the animal holding its head in a lowered position with drooping ears.”

Environmental contamination is a DNR concern, prompting the ban on carcass movement. “The CWD prion stays viable for a very, very long time. Research has also shown that animals pick up the disease while feeding near infected carcasses. Thus, we try and remove positive deer from the landscape,” says Cornicelli. “It’s not like a virus or bacteria that can be deactivated with heat (or cold depending on pathogen). Prions aren’t deactivated that way so when they are on the landscape, they are capable of spreading disease.”

“One of the biggest changes for hunters in this area will be handling carcasses,” said the DNR. “The goal is to maximize the number of hunter-harvested samples but remain flexible enough such that deer sampling and carcass restrictions are not overly burdensome. Achieving these goals will mean sampling stations will have to be consolidated and hunters may need to travel farther to get their deer sampled.”

The archery season opened September 16 and runs through December 31. Antlerless-only and youth deer hunts took place October 19-22 and were also subject to testing and movement rules. The DNR was unable to provide a comment on whether or not positive test results had occurred in this time.

Hunters were instructed to field dress the deer and register the deer as normal, being cautioned to properly dispose of carcass remains, keeping them away from scavengers until test negative results are confirmed. A dumpster was designated at the DNR forestry office in Preston for remains disposal. The DNR stipulates that the site is not to be used for deer processing.

Following registration, hunters are required to submit the head from all adult deer for lymph node testing and cape the deer if it is to be mounted. The DNR is working closely with the participating Fillmore County taxidermists who are assisting with CWD sampling. They include Norton’s Lost Arrow Taxidermy, Rushford, Broken Arrow Taxidermy and Wiste Taxidermy, both in Spring Grove. A form indicating the location from where the deer was harvested must also be included. Head collection sites include Magnum Sports in Chatfield, DNR Forestry Office in Preston, DNR Fisheries Office in Lanesboro, Goodies and Gas in Wykoff, and Oak Meadow Meats in Harmony.

During all seasons, hunters are unable to remove the carcass or carcass remains from the area prior to receiving test results.  They are encouraged to plan ahead for commercial processing. Within area 603, Chatfield’s R4 Meats is the only meat processor. However, restrictions do allow hunters to immediately transport specific portions including pieces without spinal column parts, boned-out meat, and antlers with a skull plate free of brain matter. Testing results may take up to four business days, but hunters can search online for test results using a nine-digit Minnesota DNR number at www.mndnr.gove/cwdcheck.

Area hunters are indicating that overall, the issue hasn’t compounded any difficulties with their hunts. “I have been seeing a good number of deer. Not as many as years past though,” says Lanesboro hunter and landowner Matt Aselson. “My son shot a buck during the youth hunt and we were easily able to follow the instructions on the DNR website on how to get the deer tested. We took it in on Monday morning and we got our results back on Friday night.”

While hunting in Minnesota does not appear to be slowing in Minnesota, the number of registered hunters in the southeastern region is down 20%, according to DNR figures. The department also speculated that the drop in numbers could be reflective of a late corn harvest.

By the end of all seasons, the DNR hopes to have collected 1,800 samples within the southeast to determine if and how far the disease may have spread.