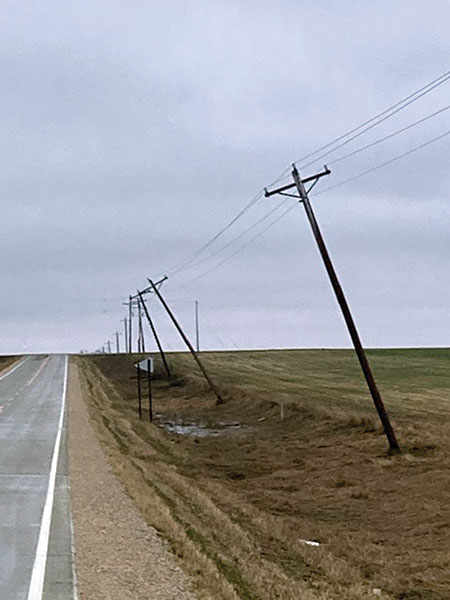 Emergency Manager/Deputy Don Kullot described the damage resulting from the April 12 storm at a special meeting of the Fillmore County Board held on April 19.

Already, damage estimates that qualify for public assistance have exceeded the necessary threshold of $43,500 required by the state. Preliminary numbers from MiEnergy are at least $50,000. MiEnergy and other damages in Spring Valley area now total more than $78,000. Kullot expects another $25,000 in possible damages are yet to be evaluated.

MiEnergy power poles along CSAH 1 southwest of Spring Valley that were new construction this past January are leaning. Several power poles throughout this area were affected. Damage to electric transmission and distribution lines is an eligible cost.

A pavilion was destroyed in a Spring Valley city park; there was also some damage to the high school.

Any individual damage needs to be a loss of at least $3,500 to be included in the county’s total.

Kullot noted the weather service confirmed Wednesday morning that there was an EF1 tornado in Fillmore County. It occurred around 10 p.m. Tuesday evening southwest of Spring Valley (about one mile southwest of the city) damaging farm buildings, power poles, and trees. Peak winds reached 100 mph. Chairman Mitch Lentz commented that it could have been a lot worse for the city of Spring Valley.

Mower and Rice Counties will also be making disaster declarations. Taopi, which has been in the news due to the extent of the tornado damage it sustained, is just southwest of Spring Valley in Mower County.

Commissioner Marc Prestby noted that while there was a Code Red warning on cell phones, no sirens sounded in the city of Canton. Sheriff John DeGeorge explained they sound the sirens if they get a request from a fire chief or a firefighter. Kullot noted there were up to five tornado warnings in Fillmore County, which were all radar indicated. He added he preferred spotters, as he hates to set off sirens only when the wind blows. DeGeorge said storms are coming along more and more often. A protocol needs to be in place as to when sirens need to be sounded.

Kullot explained sirens are meant for outdoor notification. He said one couple he spoke to didn’t hear the sirens in their home until their dogs got them up. Night storms are even more detrimental and are a concern especially for senior citizens that don’t rely on technology, but on the sounding of a siren. It is a judgement call when to set them off. DeGeorge added there is a redundancy with the Code Red; the sirens are a separate and useful alert system. Prestby commented that it is better to be safe than sorry, when deciding whether or not to sound the sirens.

Sirens go off for two minutes. Two systems came through Spring Valley, so the sirens sounded a second time 10 minutes after the first time.

Commissioners passed a resolution declaring a state of emergency due to the April 12 wind/tornados in Fillmore County causing public property damage.

Public assistance is available for debris removal that is in the public’s interest, emergency protective measures, roads and bridges, water control facilities, buildings and equipment, utilities, and parks. The facility damaged must belong to a government, public, or eligible non-profit entity.

Significant damage was also sustained by owners of private property including farm buildings, trees, campers, and more. One damaged farm site had a debris field that covered nearly a half mile. Several campers were tipped over at the Old Barn Resort due to high straight-line winds in the area. Public assistance does not help with private property damage.