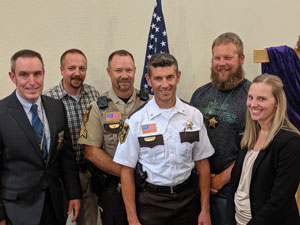 A strong emphasis was placed on how the residents of the area can assist by reporting suspicious activities they witness in their own neighborhoods.   “We need people to give us a call whenever they see something that doesn’t seem right.” explained Narcotics Investigator Jesse Grabau.  “You can report names, addresses, vehicle descriptions anonymously if you wish and know that whatever information given will be checked out and  properly filed.”

At the completion of the formal presentation, a discussion ranging from personal testimonies to questions about awareness of drugs present in this county followed.  The need to become better educated about signs pointing out undesirable drug activity was stressed and ways of exposing these criminal actions were given.  Then a display including actual containers with several illegal drugs  (wrapped and sealed so they were safe to handle) gave participants a hands-on experience.

What truly made this presentation such a unique opportunity was hearing from the presenters, who themselves worked with illegal drugs and the crimes involved. Grabau works with the drug task force that covers Fillmore County and four other surrounding counties. He was able to share insight and experience from a “boots on the ground” perspective, educating people about what drugs are most prevalent in our area, the side effects of these drugs, and what the Task Force is doing to prevent the spread and use of illegal drugs.

Grabau stressed that calling and reporting suspicious activities which you think might be drug related is ALWAYS helpful. “Don’t be put off if your concerns are not immediately addressed or you don’t see action being taken,” comments Grabau. “Any action that the Drug Task Force takes must be backed up by probable cause. It often takes multiple reports and tips before the Drug Task Force has built up enough evidence to really start investigating someone.”

It is important to call in anything you believe may involve illegal activity. “Don’t let fear stop you from reporting.  Whether you see a drug hand-off or strangers who keep stopping by a neighbor’s house late at night or even if you just notice things do not seem right,” he says. “The Drug Task Force appreciates all the reports we get, so don’t hesitate to call, even if you’re not sure it’s drug related.”

In the question and answer period one concerned citizen asked, “Why is it that half the school kids seem to know who is using drugs and where you can get them, but law enforcement seems clueless?”

In reply, Sheriff John DeGeorge explained, “We get that question a lot. The truth is we do have many suspected drug dealers we are watching. However, until enough solid evidence shows that a person is a drug dealer there’s nothing we can do. This is where everyday citizens can help out by reporting suspicious behavior.”  Call (507) 765-3874, option #1, or contact Crime Stoppers at (800) 222-TIPS (8477) or www.crimestoppersmn.org.

By submitting private video or eyewitness testimonies, area residents can help law enforcement and the county attorney’s office get the evidence they need in order to take action.

Hearing from the Assistant Fillmore County Attorney, Melissa Hammell completed the presentation. Hammell’s valuable insights into the legal workings of drug cases painted a more complete picture of the entire process, from arresting drug related criminals to prosecuting them, with the hopes of helping both the community and the criminals themselves.

She continues, “Once something is reported, if you don’t see immediate action being taken it does not mean that nothing is being done or your information has been disregarded.  When information is received it is taken seriously and can be used in a variety of ways.  The information can be used to monitor a situation and potentially build a criminal case or the information could relate to someone who is involved with child protection, adult or juvenile mental health services, probation or truancy and the drug use could be addressed in one of those settings. There is a lot that goes on outside the public view.” The public needs to trust that the information  presented is being used in the most effective manner possible.

Law enforcement, attorneys, social workers, probation officers, and other professionals who work in the system can only do so much and by the time they get involved there is probably a significant drug problem. If you have a family member or a friend who is using drugs, reach out to that person and see if treatment will be considered.

“Drug use often leads to other crimes and issues in other areas of a person’s life,” comments Hammell. “This is why it is so important for someone who has a drug problem to get into treatment.  If we can get someone to stop using, the other issues that a person is having can be addressed more easily and hopefully that person can return to law-abiding behavior.”

Besides being proactive about reporting suspicious activity, area residents are encouraged to remove from their homes all drugs they are not presently using.   There is a drug collection box located in the lobby at the Fillmore County Sheriff’s Office at 901 Houston Street NW, Preston, Minn., where expired or unneeded medications can be dropped off for disposal.