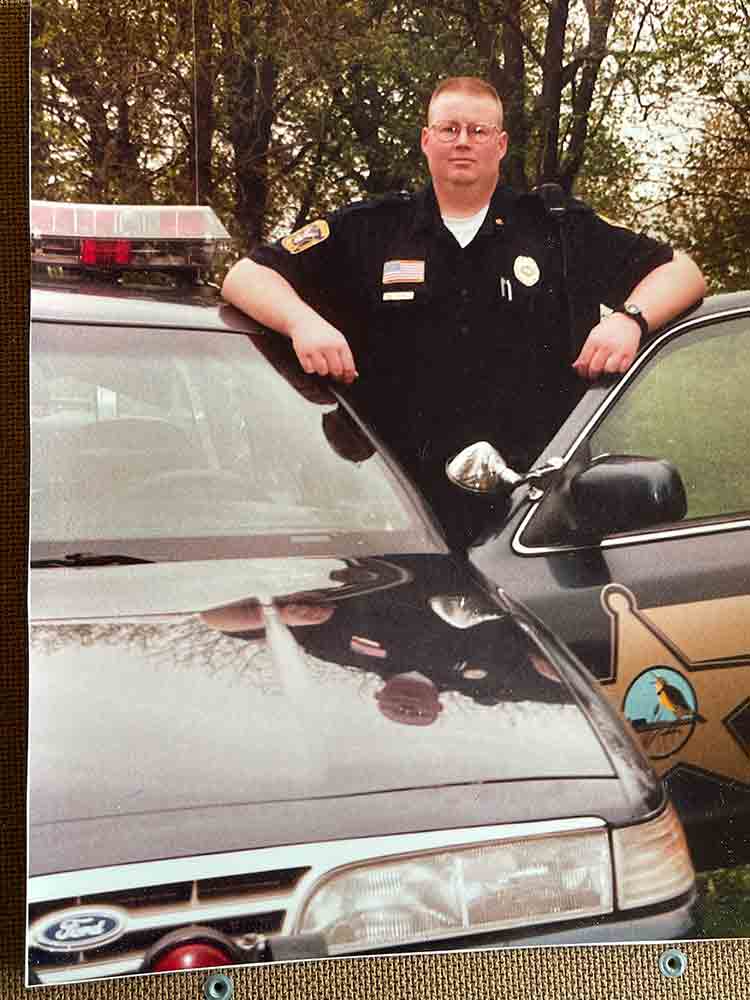 Researchers studying Post Traumatic Stress Disorder (PTSD) are constantly evaluating the powerful way a tragic memory is defined in time and how physical triggers can instantly draw a person into that memory.

The event – usually a terrifying one – which is experienced or witnessed can bring symptoms including nightmares, flashbacks and severe anxiety.  Jenny Czapiewski and the family of Officer Jason B. Meyer, who served with the Grand Meadow Police Department, are looking for ways of providing emotional and psychological support, so PTSD does not have a chance to become a reality in the lives of emergency personnel.  In Jason’s memory, a Field of Flags will be a visible sign in acknowledging this PTSD invisible battle.

The Field of Flags is to bring awareness to the lives affected by the trauma of responding to emergency situations.

Jenny remembers, “Jason was killed on September 6, 1999. It was Labor Day. He was a police officer, on duty, and was responding to a call in Racine to back up a fellow officer when the accident occurred. Jason died instantly, however you would not have known that by the response and efforts from so many other officers, firefighters, EMTs and Mayo One. Jason was flown to St. Marys hospital with continued efforts to save his life. It was not long after our family had arrived at the hospital a doctor came into the room to let us know Jason had died. Our lives changed instantly, 28 years old, a new police officer with dreams.

“Nothing made sense. It wouldn’t for weeks. As a family we wanted to honor Jason’s memory, his life. We established the Officer Jason B. Meyer Scholarship Fund, raising several thousand dollars so scholarships could be awarded for two graduating law enforcement officers from RCTC each year. So much has changed and transitioned over 23 years. There have been two generations of nieces and nephews and great-nieces and nephews. They all seem to carry a piece of Jason in them. We all talk about Uncle Jason.  His pictures are up. We wear his shirts. We go to events. It is important to us to keep his memory alive and to honor the life he lived. An awareness of how this traumatic moment affected us allowed us an understanding of the reality of what an invisible wound PTSD is.  Our family knows first hand that in this invisible fight many suffer alone. They are afraid to reach out for help! Too many officers, EMTs, paramedics, firefighters and their families are losing the battle,” states Jenny.

The field of 100 flags will be displayed in the green space by Matt’s Body Shop in Spring Valley starting Labor Day, September 5, until Sunday, September 11.

“Our family lost our son, brother, uncle, friend, and law enforcement partner in the line of duty,” mentions Jason’s niece, Kaylie Czapiewski (just six years old at the time of his death), who has taken a leadership role being instrumental in creating the Facebook page and the fundraisers.”

She continues, “The Field of Flags will be a way to honor and remember friends, family, or organizations that are close to your heart, too.  We would be honored for you to take part in the fundraiser and help support us with our new mission to help law enforcement officers, EMTs, firefighters, and first responders who might be struggling with post traumatic stress disorder. Know that 100% of the money raised during this event will go towards raising awareness and helping men and women find the services they need.”

Those involved with this fundraiser offer a special thank you to Matt’s Body Shop for allowing the Field of Flags to be placed on their property and for Herold Flags of Rochester for the use of their flags.

All donations made to the the Jason Meyer Memorial Fund, a 501 (c)(3) organization, are tax deductible.

To make payment for a flag in memory of or in honor of a loved one, use the secure Venmo business account @JasonMeyerMemorialFund. The cost is  $30 for a flag and message card. If you want to add a colored ribbon representing one of five different colors, an additional $5 donation can be made. If using Venmo please indicate the message you’d like added to your flag in the comments and the ribbon color of your choice.

An alternative form of payment can be done by clicking on the “donate” button on the Jason Meyer Memorial Fund Facebook page. If using the donate button, costs are the same; however, please direct message them what you would like written on the card to be placed on the flag and indicate if a ribbon is requested. Ribbon colors represented: green – federal agents, blue – law enforcement, red – firefighters, grey – corrections officers, gold – dispatcher, and white – all EMS.

Most importantly in the memory of Officer Jason Brent Meyer, his family invites the public to take a moment during the week of September 5-11 to walk through the Field of Flags, remembering those who have died or are living with Post Traumatic Stress Disorder.