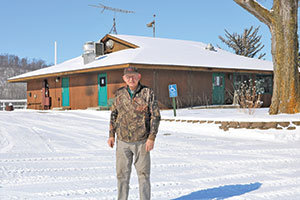 Darr had been helping the Ferndale Country Club board try to find a buyer for quite some time, with no luck.  “I’ve been trying to help out here for a few years and they needed to get it in private hands,” commented Darr, as it had become complicated having stockholders spread across the United States.

Darr felt it would be a shame to let the county club close down as it is such an asset to the City of Rushford and its residents.  It was important to him to keep it open, as he thought would be a big loss for the community if it were no longer there.

People come from other towns to play, too, which in turn brings added vitality and economic growth to Rushford.

“It’s a beautiful area and the golf course is really nice,” states Darr, and it is one of the most scenic courses in this part of the state.  The rolling hills surrounded by trees and wooded areas almost seem to call your name, inviting you to hit the links.

If Ferndale Country Club had closed down, the community of Rushford and the surrounding area would surely have felt the loss, but now that it has been purchased by Darr it will see a new breath of life.

“There are a lot of decisions to be made yet,” notes Darr, but a few major items on the checklist have been taken care of.

Customers and golfers will see some familiar faces when Ferndale Country Club reopens.  Rushford-Peterson High School golf coach Luke Rye will manage the clubhouse along with Jack Culhane, who patrons are familiar with as he has worked in the clubhouse for approximately two years.

Ralph Dunbar will continue to be the groundskeeper at Ferndale Country Club as he has done a great job, according to Darr.

There will be a few improvements done in the clubhouse, such as new carpet, new doors and painting in the near future, and work has already begun outdoors.

“We are in the process of trying to get rid of dead trees right now,” Darr states, saying they have cut down over 50 trees in the last few weeks.  He may also tear a building down on the property as well.

With 70 acres to tend to, it may take a little time to get everything done that he would like, but it will surely be worth it in the end.

No stranger to hard work, Darr has owned and operated several Rushford businesses over the years, and although he explains that his kids mostly take care of that now, he has found himself a new project.

When asked if Ferndale Country Club was his retirement project, Darr replied, “It seems to be becoming that way.” But it is also a job he is doing out of love for not only the country club, but the community of Rushford as well.

“Rushford’s been very good to me,” explains Darr.  Having lived in Rushford for 44 years, he says, “This is our hometown — even though I was in my 30s when I moved here — this is our hometown.” And, he could not bear the thought of the community losing Ferndale.

“There has been a lot of support from the community,” notes Darr.  “I can’t believe how many people have said something, it’s been tremendous,” he adds.

“There are a lot of people that want this place to be here — a lot of support — I think it will be fine,” Darr says.

Ferndale Country Club will open this spring as soon as the course is fit to open, says Darr.  He is very excited and looking forward to seeing golfers teeing it up at Ferndale once again.