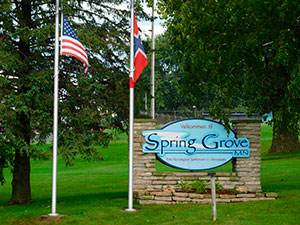 The delicious-smelling aroma of BBQ will soon be filling the air in downtown Spring Grove. The city council unanimously approved the Conditional Use Permit (CUP) for Bullfrog Properties at the October 25 meeting.

Mayor Solberg called for a motion to open the public hearing at 6 p.m. The CUP would allow Bullfrog Properties to operate a brewpub, BBQ and woodfired pizza restaurant at 130 East Main Street. Solberg asked Patrick Longmire Jr., Bullfrog Properties, if he would like to say anything before the council heard from the residents and business owners in the audience. Longmire said, “Trying to improve Spring Grove, and I believe that we found the best location that we possibly could.” The City Clerk/Administrator read the emails and letters received by the city regarding the CUP. The concerns revolved around parking, excessive noise, and funerals at the church. The solutions suggested by Longmire illustrate that the company intends to be a good neighbor. Longmire appreciates the residents who think they will do such good business that there will be a parking issue. Christian and Kate Myrah, RockFilter Distillery, expressed their support of the new business located across the street from the Distillery. Beth Pederson, a neighbor of the new location, also expressed her support of the brewpub and restaurant.

Mayor Scott Solberg called the meeting to order at 6 p.m. and led his fellow councilors and the audience in the Pledge of Allegiance.

The council approved the meeting agenda with one addition and the consent agenda, including the September 20 regular meeting minutes and the public hearing on the updated comprehensive plan 2022, financials, Resolution 22-40 Authorizing the Transfer of City Funds, and Resolution 22-41 Accepting a Gift from Spring Grove Communications.

The Public Hearing was closed, and the council returned to the regular council meeting at 6:23 p.m.

After returning to the open session, the council unanimously approved Bullfrog Properties’ request for a CUP.

The numbers in the recently approved contract with the Houston County Sheriff’s Office were not updated before it was signed. The sheriff noted that it was a human error that his office did not update the numbers. The revised contract was unanimously approved. Once it is reapproved by the county, Elton and the sheriff will see that it has been resigned by both government entities. Elton and the sheriff will also get together to expand the narration in the addendum.

The council approved paying for a new pole which will cost an estimated $1,500. In addition, Spring Grove Communications is paying for the dirt and retaining wall in the alley between American Family Insurance and Lucky’s. The total project cost is $3,500. The project will start immediately to ensure that it is completed before winter arrives since the city’s big sander cannot get through the alley.

Elton explained that the administrative assistant accepted the revised job description with an addendum. There is a temporary trial period of six months. No action is required.

Elton updated the council on work completed by Pantheon, noting, “We are moving in the right direction.” No action is required.

Councilmember Rohland shared financial numbers from the Municipal Liquor Store. At the end of August, the Liquor Store was operating at a loss of $4,945.60; at the end of September, the store showed a loss of $7,694.70. Rohland explained that at the end of December 2021, the store’s checking account showed a balance of $31,100.26 and there was $106,641.12 in the cash equivalency fund, $6,732.23 in checking and $78,434.00 in cash equivalency fund. Rohland stressed that the question on next month’s ballot is non-binding and is meant to get the pulse of the residents. The council agreed to send out an informational flyer with the next utility bill. Residents will receive the flyer before November’s election. The mayor confirmed that taxpayer dollars are not subsidizing the liquor store.

The Spring Grove City Council’s next regular meeting is Tuesday, November 15, at 7 p.m. instead of 6 p.m., in the Spring Grove Communication room 100. The public is invited to attend.